Culture, World, Arts and Entertainment, Charity, Bill Gates, Melinda Gates, Technology
Save for Later
Add to My Front Page
From The Right 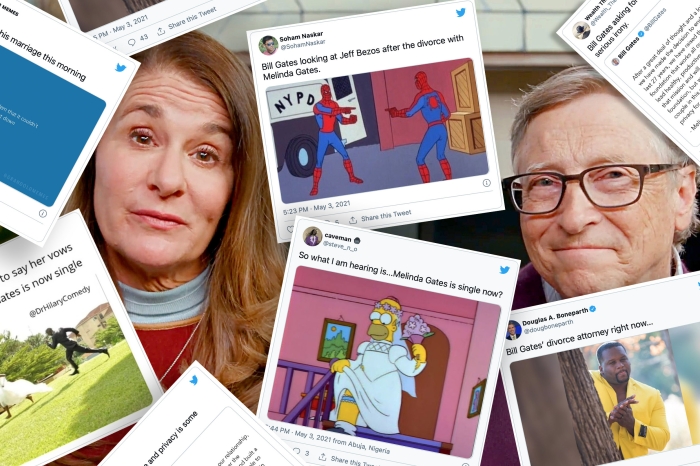 They opened the online flood-Gates.

When Bill and Melinda Gates announced they were getting divorced Monday, the ever-sympathetic social-media masses were quick to pay their respects — with a tsunami of mocking memes.

The philanthropist couple had tweeted the shocking news in a joint statement on their separate accounts yesterday afternoon.

“After a great deal of thought and a lot of work on our relationship, we have made the decision to end our marriage,” they wrote.

The announcement concluded, “We continue to share a belief in that mission and will...

PERSPECTIVES BLOG
Trying to Navigate a Polarized World? This Ancient Philosophy Can Help

NEWS
Critical Race Theory Is Banned in These States
Newsweek

Google has stopped short of firing its global lead on diversity strategy for a shocking blog post from 2007 in which he argued that Jewish people have an “...

Not long after George Floyd was murdered on a Minneapolis street last Memorial Day, Meghan Dougherty felt an awakening in her suburban Texas school district...

Teacher on leave after speaking out against pronoun policy for students

A Loudoun County, Virginia, gym teacher was placed on leave days after he spoke out against a proposed school policy that says educators should refer to...

One Year After George Floyd’s Murder, the Racial Reckoning Gave Way to a Backlash
ANALYSIS

It has now been a year since white police officer Derek Chauvin murdered George Floyd by kneeling on his neck for approximately nine minutes, while a...

The GOP Now Stands for Nothing
OPINION

The Republicans in Congress are blocking a bipartisan investigation into the January 6 insurrection. Their spines crushed by years of obedience to Donald Trump...

Critical Race Theory Is Banned in These States

Florida has become the latest U.S. state to ban the teaching of critical race theory, which examines the ways race and racism intersect with politics, culture...

Will face masks be a regular part of life post-pandemic?

Public health experts are discussing the potential benefits of wearing masks even after the coronavirus pandemic has ended, citing lower cases of respiratory...

Compassion Fatigue Is Overwhelming Educators During the Pandemic
OPINION

In April 2020, my great-aunt suddenly died from a rare and aggressive cancer. She was an adored and hilarious high school “cafeteria lady” of 20 years, but her...

Manufacturer Stetson announced Saturday it's pulling its products from a store in Nashville, Tennessee, which advertised the sale of "not vaccinated...

Defund the police? We're at the center of the storm, doing the jobs no one else wants
OPINION

Like Black Lives Matter, Defund the Police is a political hashtag that means different things to different people. Some want to abolish the police ...