Science, Space, Technology, NASA, SpaceX
Save for Later
Add to My Front Page
From The Center 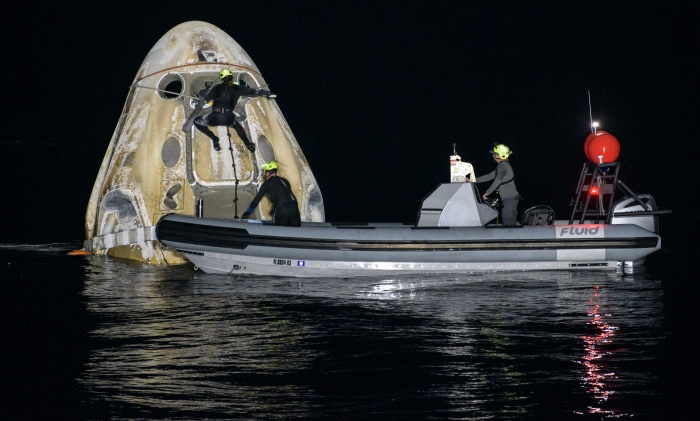 The four astronauts aboard SpaceX’s Crew Dragon capsule “Resilience” safely returned to Earth on Sunday, splashing down in parachutes landing in the Gulf of Mexico after a record-setting mission to the International Space Station.

The astronauts spent more than five months in space for the Crew-1 mission, the longest-ever duration for a crew launched in an American-built spacecraft.

Read full story
Some content from this outlet may be limited or behind a paywall.
Science, Space, Technology, NASA, SpaceX

The theory that COVID-19 escaped from a lab has never been more popular. There are many questions about the degree to which it is plausible and which alleged...

Want a chance to win millions of dollars? A college scholarship? A free shotgun? All you have to do is get vaccinated against COVID. As vaccination...

An auction for a ride into space next month alongside Jeff Bezos and his brother ended with a winning $28 million bid Saturday. The Amazon founder’s...

F.D.A. Approves Alzheimer’s Drug Despite Fierce Debate Over Whether It Works

The Food and Drug Administration on Monday approved the first new medication for Alzheimer’s disease in nearly two decades, a contentious...

When HIV/AIDS emerged in the 1980s, it was alleged, with a little Soviet help, that the virus had been developed in an American lab. Between...

Detectives Just Used DNA To Solve A 1956 Double Homicide. They May Have Made History

It was only three days into 1956 when three boys from Montana, out for a hike on a normal January day, made a gruesome discovery they were unlikely to ever...

New NASA chief doesn't think UFOs are an optical illusion, according to interview

An upcoming Pentagon report on UFOs isn't expected to determine what the mysterious flying objects observed by Navy pilots are, but NASA is now among...

The first drug promising to slow the memory-robbing march of Alzheimer’s disease was approved by U.S. health regulators, a watershed after years of...

Are we alone? Have alien spacecraft been buzzing across Earth's skies? Those are the questions being asked in the U.S. government's new report on unexplained...

Fauci: Republican Attacks on Me Are ‘Painfully Ridiculous’ — They Are Attacking ‘Science and the...

National Institute of Allergy and Infectious Diseases head Dr. Anthony Fauci said Wednesday on MSNBC’s “MTP Daily” that the Republican attacks on him are “...

Was mask-wearing pointless after all? Fauci must be forced to answer
OPINION

Did we ever need masks?  It’s a touchy, complex question. People may not want to learn that millions of us covered our faces for 15 months for no good...

A scientist who emailed top U.S. infectious diseases official Dr. Anthony Fauci about the possibility of COVID-19 being engineered in a laboratory...