SpaceX launches 4 astronauts to ISS on recycled rocket and capsule

Science, SpaceX, Space, Technology, Business
Save for Later
Add to My Front Page
From The Left 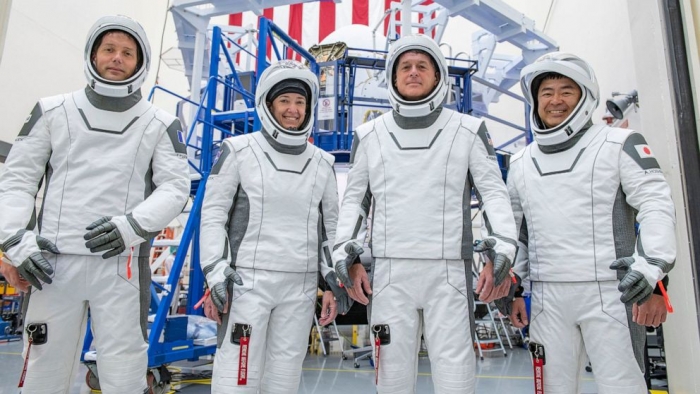 The Falcon 9 rocket blazed across a black sky just before sunrise and NASA confirmed shortly after liftoff Friday that the astronauts had safely reached orbit.

An auction for a ride into space next month alongside Jeff Bezos and his brother ended with a winning $28 million bid Saturday. The Amazon founder’s...

F.D.A. Approves Alzheimer’s Drug Despite Fierce Debate Over Whether It Works

The Food and Drug Administration on Monday approved the first new medication for Alzheimer’s disease in nearly two decades, a contentious...

Amazon founder and CEO Jeff Bezos announced Monday that he’s going to space on the first crewed flight of the New Shepard, a rocket made by his company Blue...

How Congress wrecked its own science bill, explained in 600 words
ANALYSIS

Earlier this year, it looked like Congress would do the unthinkable: pass a truly big, bipartisan bill. The legislation, known as the Endless Frontier Act,...

Former President Barack Obama appeared on the The Late Show with James Corden on Monday night to crack wise with the comedian and his band. Corden hit the...

New NASA chief doesn't think UFOs are an optical illusion, according to interview

An upcoming Pentagon report on UFOs isn't expected to determine what the mysterious flying objects observed by Navy pilots are, but NASA is now among...

The first drug promising to slow the memory-robbing march of Alzheimer’s disease was approved by U.S. health regulators, a watershed after years of...

Are we alone? Have alien spacecraft been buzzing across Earth's skies? Those are the questions being asked in the U.S. government's new report on unexplained...

Can scientific uncertainties about COVID-19 be fact-checked?
OPINION

The coronavirus pandemic and COVID-19 have brought hardships from the deaths of loved ones to economic struggles to social isolation. Everyone has been touched...

Fauci: Republican Attacks on Me Are ‘Painfully Ridiculous’ — They Are Attacking ‘Science and the...

National Institute of Allergy and Infectious Diseases head Dr. Anthony Fauci said Wednesday on MSNBC’s “MTP Daily” that the Republican attacks on him are “...

Was mask-wearing pointless after all? Fauci must be forced to answer
OPINION

Did we ever need masks?  It’s a touchy, complex question. People may not want to learn that millions of us covered our faces for 15 months for no good...

A scientist who emailed top U.S. infectious diseases official Dr. Anthony Fauci about the possibility of COVID-19 being engineered in a laboratory...