race and racism, US Senate, bipartisanship
Save for Later
Add to My Front Page
From The Center 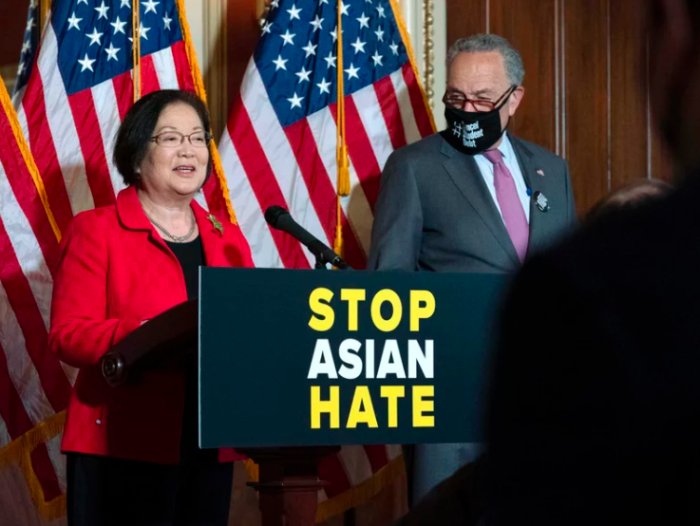 Capping nearly two weeks of talks between Democrats and Republicans, the Senate approved legislation on Thursday to ramp up law enforcement efforts to better protect the Asian American and Pacific Islander community from hate crimes.

The move marks a rare moment of bipartisan unity needed to approve the Senate legislation despite a new political era marked by increasingly bitter party divisions.

The bill, which needed 60 votes for passage in the evenly divided Senate, was approved by a 94-1 vote. Only GOP Sen. Josh Hawley of Missouri voted no.

The Problem With Patriotism
OPINION

In 2008, during a campaign rally in Madison, Wisconsin, to elect her husband as the first Black president, Michelle Obama said it was then, for the first time...

The nation’s reckoning over race has reached thousands of U.S. schools, and so, too, has a conservative backlash. Schools across the country are working to...

On April 21, while attempting to serve a warrant, North Carolina police shot and killed Andrew Brown Jr., a 42-year-old Black man in Elizabeth City. The entire...

Bush says if GOP stands for 'White Anglo-Saxon Protestantism, then it's not going to win...

Former President George W. Bush again criticized what he sees as a Republican Party that is not inclusive enough, arguing that if it stands for "White Anglo-...

The country is talking about race in schools. Minneapolis offers lessons.

High school teacher Nafeesah Muhammad decided to play a game recently with her students. In the style of the classic teenage pastime “never have I ever,” she...

There’s been a recent flurry of studies and analyses that take a deeper look at the results of the 2020 election. These examinations don’t contradict our early...

President Biden says America is not a racist country, but that Black Americans have been left behind and "we have to deal with it." In an interview on NBC's...

Across jobs and industries, Black employees have more negative views of the state of diversity and inclusion than their colleagues, according to a new report...

Fairfax County Public Schools in Virginia could shell out up to $280,000 of taxpayer funds for a pricey equity consultant to develop an "anti-racist"...

A California state assembly committee gave its stamp of approval on April 27 to legislation that would significantly soften sentences for people convicted of...

A disabled Wisconsin dairy farmer is suing the Biden administration over a COVID-19 loan forgiveness program – alleging it is racist because whites aren’t...

Those defending the traditional American view of elections—free, open, and by secret ballot—don’t recognize the nature of the opposition. How rights are...