Myanmar Is on the Precipice of Civil War

World, Myanmar, Myanmar coup, civil war, Democracy
Save for Later
Add to My Front Page
From The Center 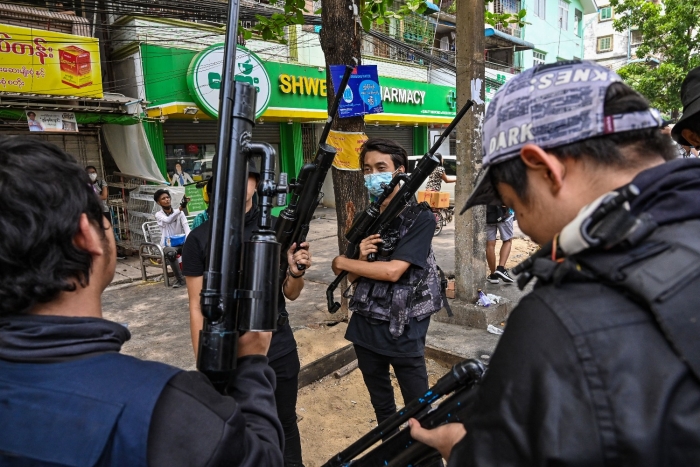 Since the Feb. 1 military coup, Myanmar has rapidly destabilized into widespread protests and indiscriminate violence. According to the monitoring group Assistance Association for Political Prisoners, at least 614 protesters have been killed and 2,857 detained as of April 8. The Tatmadaw, as Myanmar’s military is called, appears unwilling to back down despite growing international pressure.

Beyond the protests in the cities, however, the role that Myanmar’s ethnic armed organizations (EAOs) choose to adopt could become key to the country’s long-term stability.

Read full story
Some content from this outlet may be limited or behind a paywall.
World, Myanmar, Myanmar coup, civil war, Democracy

The human cost of Biden’s travel ban on India
ANALYSIS

For the more than 2.7 million Indian immigrants who have put down roots in the US, President Joe Biden’s decision to ban most travel from their home country as...

One simple question has kept China-watchers scratching their heads for years: Will the country get old before it gets rich? The metaphorical needle between...

The US is approaching a turning point where Covid vaccinations are sharply reducing infection and hospitalization rates, key figures in the fight against the...

Biden move to share vaccine designed to spread US influence

It won’t speed the manufacture of vaccines. It enraged the developers who delivered lifesaving doses in record time. But President Joe Biden’s decision to...

President Biden will send an additional 20 million doses of coronavirus vaccines to other countries by the end of June, including shots authorized by the FDA...

A World Health Organization official said Monday it is reclassifying the highly contagious triple-mutant Covid variant spreading in India as a “variant of...

The World Health Organization (WHO) has approved the first Chinese-made Covid-19 vaccine for emergency use worldwide, as many countries struggle for access in...

Before we dive into the Wuhan laboratories again, notice this story in the New York Times this week: Part of China’s largest rocket, the Long March 5B, is...

State Dept. Denies Any Deal With Iran for Prisoner Release

The United States on Sunday denied a report by Iran's state television that the arch-foes had reached a prisoner swap deal in exchange for the release of $7...

The United States will send an additional $310 million in aid to the Northern Triangle countries and train a Guatemalan “task force” in an effort to upend the...