Kamala Harris, Joe Biden, Immigration, Border Crisis
Save for Later
Add to My Front Page
From The Right 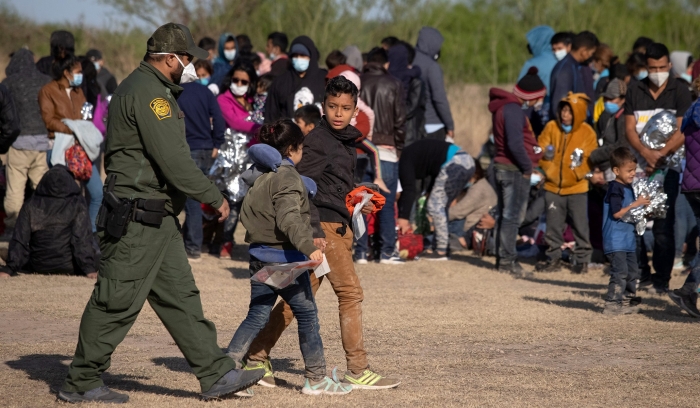 President Joe Biden on Wednesday appointed Vice President Kamala Harris to lead the White House’s efforts to combat the worsening crisis at the U.S.-Mexico border where governmental resources have been stretched thin by a surge of migrants entering the country.

Harris will work with Mexico, El Salvador, Guatemala, and Honduras in an attempt to slow the influx of asylum seekers. U.S. Customs and Border Protection has said its agents encountered 100,000 migrants making illegal crossings in February, a 28 percent increase from the month before.

Read full story
Some content from this outlet may be limited or behind a paywall.
Kamala Harris, Joe Biden, Immigration, Border Crisis

The New York Post temporarily deleted, and then edited and republished, a debunked article that falsely claimed that copies of Vice President Kamala Harris'...

Vice President Kamala Harris was huddled with other White House officials in President Joe Biden's private dining room last week when the room let out a "...

President Joe Biden is tasking Vice President Kamala Harris with overseeing efforts with Central American countries to stem the flow of migrants to the US...

US Vice President Kamala Harris said Tuesday that Washington "must respond" to attacks by El Salvador's leadership on the independence of its judiciary, and...

A New York Post reporter who authored a story falsely claiming that migrant children were being given copies of Vice President Kamala Harris' children's book...

Vice President Kamala Harris said Sunday she will increasingly be calling on United Nations allies to help with the immigration crisis at the U.S. southern...

New York Post reporter says she resigned over being 'forced' to write 'incorrect...

A reporter said that she resigned from the New York Post after she was "forced" to write the "incorrect" story about Vice President Kamala Harris's book being...