The COVID-19 relief package: Where the money goes

Economic Policy, coronavirus stimulus, Role of Government, Federal Budget, Economy and Jobs, Facts and Fact Checking
Save for Later
Add to My Front Page
From The Left 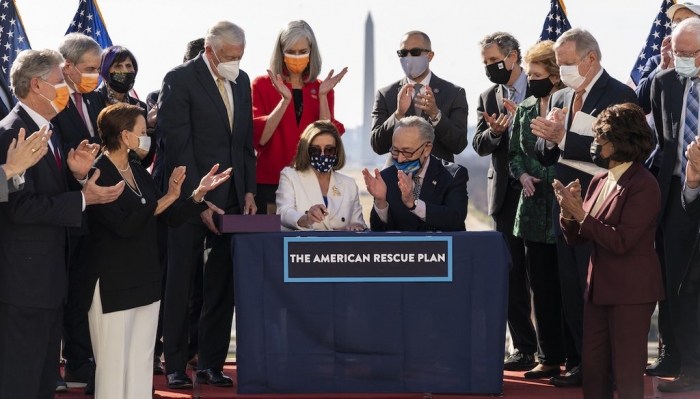 There are a few big chunks of money in the American Rescue Plan Act that have generated a lot of news coverage and are pretty well known. In response to a reader’s request, we present the whopping $1.86 trillion spending plan in pie chart form.

There are the $1,400 checks (or more likely deposits) to many citizens or permanent legal residents and their dependents. That comes to about $410 billion.

Republican leaders told President Joe Biden on Wednesday that they will draw a hard line on raising taxes to pay for infrastructure, demonstrating the...

President Joe Biden claimed last Wednesday that the last five leaders of the Federal Reserve had declared that his American Jobs Plan proposal will increase...

President Joe Biden said Monday that more than $350 billion will be sent to states and localities to get public employees laid off when governments had to...

President Joe Biden credits the American Rescue Plan for helping Americans recover from the pandemic and economic fallout, including those who have experienced...

“Inflation in April accelerated at its fastest pace in more than 12 years… The Consumer Price Index, which measures a basket of goods as well as energy and...

U.S. consumer prices increased by the most in nearly 12 years in April as booming demand amid a reopening economy pushed against supply constraints, which...

From lumber to labor, are we now in a ‘shortage economy’?

The economic trend of recent decades has been abundance for U.S. consumers, built on globalization and supply-chain automation. For now, the story is looking...

The U.S. economy added 266,000 new jobs in April, according to the Bureau of Labor Statistics. While that figure shows the country is continuing to recover...

The strong economic recovery came to a surprising halt amid the federal government reporting only 266,000 new net jobs created in April. Axios adds that “...