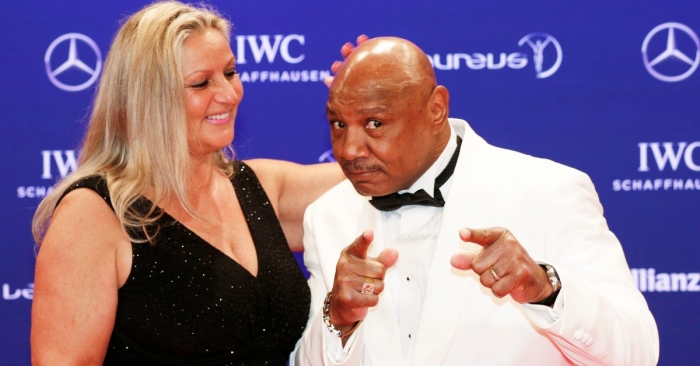 In March 2021, following the death of Hall of Fame middleweight boxer Marvelous Marvin Hagler, rumors swirled online that the 66-year-old had died from receiving a COVID-19 vaccination.

The claim was widely shared on Facebook and Twitter, but appears to have originated from one source only, and has been explicitly refuted by Hagler’s wife, Kay (shown with Hagler in the photograph above).

Hagler, who was undisputed middleweight world champion for a remarkable seven years during the 1980s, died on March 13.

PERSPECTIVES BLOG
Why do People Believe in Conspiracy Theories? What the Leading Research Says

The rollout of children’s COVID vaccines has begun: On Monday, the FDA approved the Pfizer shot for 12- to 15-year-olds. That’s just the beginning—last week,...

Florida Gov. DeSantis and YouTube are sparring over a video takedown. Is it censorship or...

In early April, YouTube took down a video featuring Florida Gov. Ron DeSantis and a group of controversial scientists at a March 18 coronavirus roundtable. The...

The White House is working with more than a dozen groups to develop guidelines for vaccine passports that could be used to get people back to work, according...

Fox News’ Tucker Carlson says so many outrageous things that it’s probably better off to ignore much of it. If I wanted, I could probably write a Carlson item...

Facebook has frozen Venezuelan President Nicolás Maduro's page after he claimed without evidence that a herbal remedy could cure Covid-19. He claimed in...

Robert Redfield, former director of the Centers for Disease Control and Prevention, told CNN Friday he believes the virus that causes COVID-19 was accidentally...

An article from The Defender, a news website that describes itself as “an online news site to evade official censorship, to report fact-based news and sponsor...

Twitter said Monday it will start labeling coronavirus vaccine misinformation on its platform and warned that those who violate its rules repeatedly will face...