Justice Department, US Senate
Save for Later
Add to My Front Page
From The Right 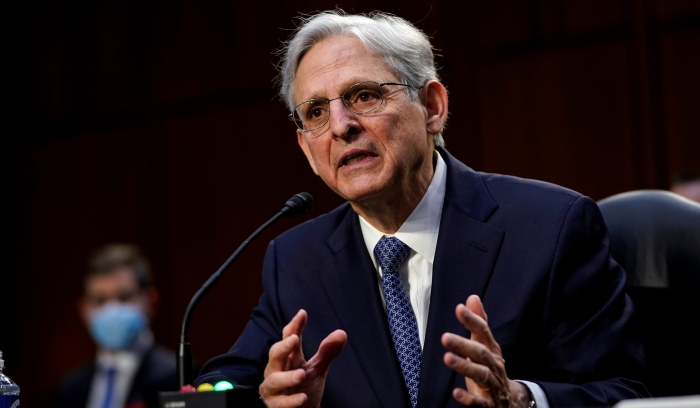 The Senate on Wednesday voted 70-30 to confirm Merrick Garland as attorney general, five years after the federal appeals court judge was blocked from consideration as former President Barack Obama’s nominee to the Supreme Court.

Garland has said his top priority as head of the Justice Department will be overseeing investigations into the January 6 Capitol riot.

Read full story
Some content from this outlet may be limited or behind a paywall.
Justice Department, US Senate

PERSPECTIVES BLOG
/Story of the Week: Derek Chauvin Found Guilty On All Charges In George Floyd's Death
NEWS
Schumer in bind over fight to overhaul elections
The Hill

Go ad-free! Support AllSides.
About these ads
More news about US Senate
https://www.nationalreview.com/news/senate-votes-to-confirm-merrick-garland-as-attorney-general/

Senate Republicans dramatically changed their party rules to take a hard line on the debt limit in the coming months. Democrats don't care. In fact, the...

Democrats now face the task of overcoming their own differences on the measure, and deciding whether they will use it as a vehicle to try to curb the...

Schumer in bind over fight to overhaul elections

Senate Majority Leader Charles Schumer (D-N.Y.) faces big headaches in his own party as he tries to get a sweeping elections bill to President Biden’s desk...

Senate Republicans are expressing dismay, publicly and privately, over the House GOP’s vote to remove Rep. Liz Cheney (R-Wyo.) from leadership, which some GOP...

A Senate committee deadlocked along party lines Tuesday over a sweeping Democratic election bill, illustrating the challenges party leaders will have passing...

Manchin: I would endorse Murkowski 'in a heartbeat'

Democratic Sen. Joe Manchin of West Virginia didn’t flinch when asked whether he would cross party lines to back his Republican colleague and friend in Alaska’...

Republican Sen. Josh Hawley the only senator to vote against it. It was authored by Hawaii Democratic Sen. Mazie Hirono, and passed amid a spike in hate crimes...