Justice Department, portland riots, Violence in America, Criminal Justice
Save for Later
Add to My Front Page
From The Right 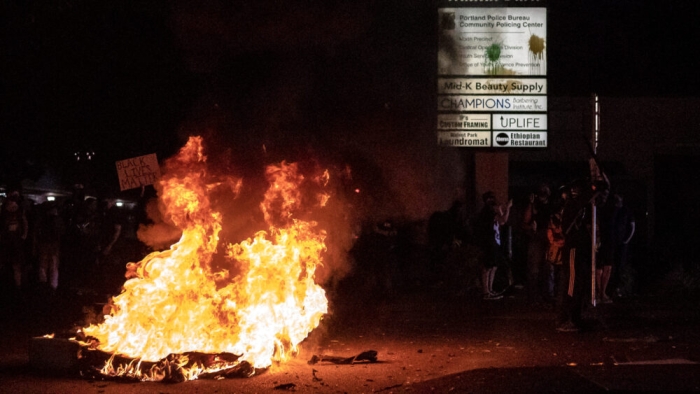 Since President Joe Biden took office in January, the Department of Justice has been quietly dismissing federal cases against Portland, Oregon, rioters according to local media.

“Federal prosecutors have dismissed more than one-third of cases stemming from last summer’s violent protests in downtown Portland when protesters clashed with federal agents,” KGW reported Wednesday. The network “reviewed federal court records and found 31 of the 90 protest cases have been dismissed by the U.S. Department of Justice, including a mix of misdemeanor and felony charges.”

Attorney General Merrick Garland on Tuesday announced that the Justice Department will conduct a 30-day internal review to determine how the agency can bolster...

Merrick Garland has been confirmed as America’s top law enforcement officer, a boost for Joe Biden’s drive against racial discrimination in the criminal...

Poised to take over a beleaguered Justice Department, Merrick Garland may face his biggest test
ANALYSIS

For Merrick Garland, a well-regarded lawyer and federal judge — and onetime Supreme Court nominee — there was a critical condition under which he’d accept the...

The US government has appealed a UK judge’s ruling against the extradition of the WikiLeaks co-founder Julian Assange, according to a justice department...

DOJ to ask Trump-appointed US attorneys to resign

The Justice Department, as soon as Tuesday, is expected to ask US attorneys appointed by former President Donald Trump to submit their resignations, a turnover...

Justice Department to review how best to fight hate crimes

Attorney General Merrick Garland on Tuesday ordered a review of how the Justice Department can best deploy its resources to combat hate crimes during a surge...

Merrick Garland’s handling of the Oklahoma City bombing investigation was a turning point in his career – and may offer clues as to how he’ll proceed as his...

A new chapter of Merrick Garland's long career in the law has opened after the Senate voted to pave the way for him to serve as attorney general. The 70-30...

Attorney General Merrick Garland announced Tuesday that he is initiating a 30-day review of how the Justice Department can combat hate crime. In a memo to...

DOJ Charges 474 With COVID-Related Fraud in the Past Year

The Department of Justice announced it has charged nearly 500 people with engaging in COVID-19 scams worth hundreds of millions of dollars. “The Department...

The Senate on Wednesday voted 70-30 to confirm Merrick Garland as attorney general, five years after the federal appeals court judge was blocked from...

The U.S. Supreme Court will hear oral arguments later this term in a case that pits free speech advocates against public school officials who seek to punish...

President Joe Biden’s nominee for U.S. attorney general, Merrick Garland, said during the first day of his confirmation hearing on Monday that the attacks on...