FBI, Capitol Chaos, Violence in America, Polarization, 2020 Election
Save for Later
Add to My Front Page
From The Center 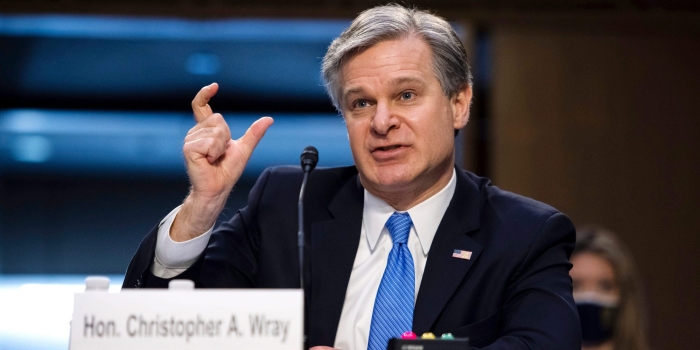 During congressional testimony on Tuesday, FBI Director Christopher Wray defended the agency's actions leading up to the Capitol siege and said it sees the riot as an act of domestic terrorism.

Wray is among several current and former law enforcement officials who testified or are slated to testify before Congress about the siege and how to prevent such an event from happening again.

Here are the biggest takeaways from Wray's testimony before the Senate Judiciary Committee:

The FBI alerted law enforcement partners about the threat of violence before the siege
...

Read full story
Some content from this outlet may be limited or behind a paywall.
FBI, Capitol Chaos, Violence in America, Polarization, 2020 Election

PERSPECTIVES BLOG
How Can America Depolarize? The Best 11 Ideas from Early 2021

The FBI is facing new scrutiny for its 2018 background check of Brett Kavanaugh, the supreme court justice, after a lawmaker suggested that the investigation...

The search for the insurrectionists who stormed the U.S. Capitol last month isn’t your typical FBI manhunt. Usually, when the FBI asks the public for help...

The FBI stepped up its search for a suspect who on Jan. 5 planted explosive devices near the Democratic and Republican committee headquarters in Washington,...

FBI Director Christopher Wray is making his first extensive remarks about the Jan. 6 riot at the U.S. Capitol before a Senate panel Tuesday, as the agency...

Enrique Tarrio, the leader of the Proud Boys extremist group, has a past as an informer for federal and local law enforcement, repeatedly working undercover...

There were nearly 4.7 million gun background checks run through the FBI’s national instant check system in March — the highest-ever monthly total in the more...

The suspected gunman who killed 10 people in a mass shooting at a Boulder, Colo., grocery store this week was previously known to the FBI, according to a...

The Federal Bureau of Investigation (FBI) is said to be investigating whether aides to embattled New York Gov. Andrew Cuomo (D) gave false data regarding the...