Foreign Policy, World, Joe Biden
Save for Later
Add to My Front Page
From The Center 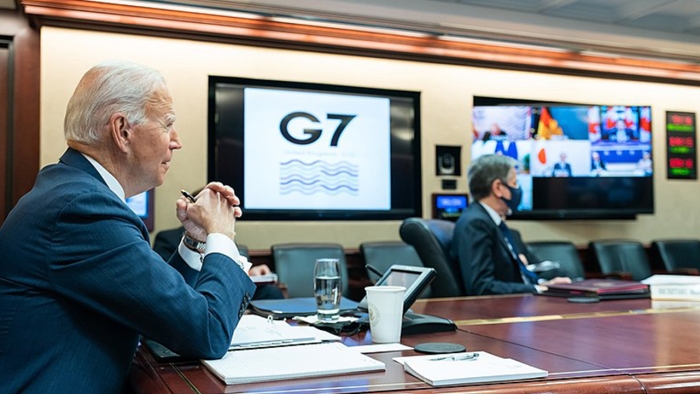 President Joe Biden begins his term with a majority of Americans having confidence in his ability to handle international affairs. In a new Pew Research Center survey, 60% of U.S. adults have confidence in Biden on foreign policy – fewer than said the same of Barack Obama as his presidency began (74%) but more than for Donald Trump in his first year (46%).

President Joe Biden hosted Japanese Prime Minister Yoshihide Suga at the White House on Friday in his first in-person meeting with a world leader since he took...

President Joe Biden on Friday signed an emergency determination that officials said would speed refugee admissions to the U.S., but he did not immediately lift...

Biden’s Next Afghanistan Challenge: How to Police It From Outside
OPINION

President Joe Biden’s decision this week to withdraw all troops from Afghanistan before September 11 has left policymakers, military leaders and national...

Russia on Friday asked 10 U.S. diplomats to leave the country in retaliation for Washington’s expulsion of the same number of Russian diplomats over alleged...

Russia will expel 10 U.S. diplomats and add eight current and former U.S. officials to its no-entry list in retaliation for sanctions that the Biden...

President Biden will sign an order Friday to keep the number of refugee admissions this year at the historically low figure set by the Trump administration,...

The United States and China have agreed to cooperate and “curb climate change with urgency” in the lead-up to President Joe Biden hosting a virtual summit of...

Biden to keep refugee admissions at Trump-era levels, despite earlier moves to increase it

President Biden is keeping refugee admissions at 15,000 this fiscal year -- the level set at the end of the Trump administration -- despite earlier proposals...

Unlike Genghis Khan and Alexander the Great, the Soviet Union and the British Empire, the United States finds itself in a unique position that no other nation...

The Biden administration declared a national emergency on Thursday, slapping sanctions on more than three dozen people in Russia and expelling 10 diplomats, in...