Trump Mulls White House Bid in CPAC Speech: ‘I May Even Decide to Beat Them for the Third Time’

Donald Trump, Republican Party
Save for Later
Add to My Front Page
From The Right 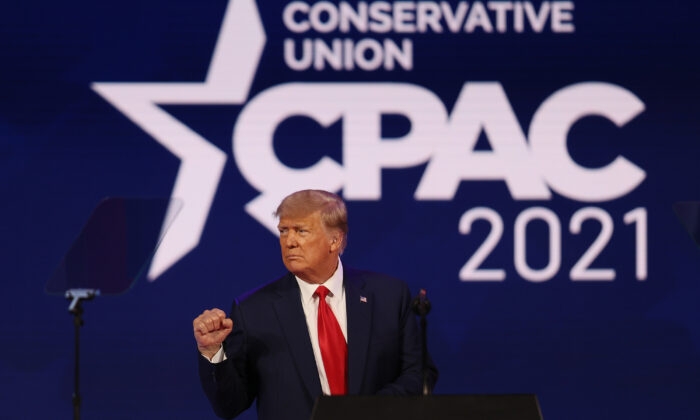 Former President Donald Trump delivered his first major speech after leaving office, charting a path forward for the Republican Party and conservatives but suggesting that he might run in 2024.

“Democrats should suffer withering losses in the midterms and to lose the White House decisively four years from now… I may decide to beat them for a third time,” Trump said, asserting that “our movement of hard-working American patriots is just getting started and in the end, we will win.”

Read full story
Some content from this outlet may be limited or behind a paywall.
Donald Trump, Republican Party

After outcry, Biden plans to lift refugee cap in May

President Joe Biden plans to lift his predecessor’s historically low cap on refugees by next month, after initially moving only to expand the eligibility...

No one had to tell Ron DeSantis that his mock debates had bordered on disastrous. His answers rambled. He seemed uninspired. By the time he got to the...

The Trump presidency may be over, but the Trump era has only just begun—at least when it comes to influence over the nation’s courts. Measured solely by the...

Donald who? Lower-profile Trump still has grip on GOP.
ANALYSIS

Has Donald Trump’s time come and gone? After failing to win reelection in 2020 and getting booted from Twitter after the Jan. 6 Capitol insurrection, he seems...

After criticism, Biden says he will raise U.S. cap on refugee admissions

President Joe Biden said on Saturday he will raise the cap on the number of refugees admitted this year to the United States, a day after he drew criticism...

Former President Trump’s endorsements pose a test for him ahead of 2022 as he looks to flex his political muscle after leaving office. The former president...

The White House on Friday said that President Biden is expected to increase the refugee cap for this fiscal year, just hours after he signed an order that kept...

Nikki Haley for President 2024: Not If Trump Runs

Nikki Haley, former South Carolina governor and United Nations ambassador, said she will only consider a run for president in 2024 if former President Donald...

Trump predicts 'a Republican' will win White House in 2024

Former President Donald Trump predicted only that "a Republican candidate" would win the presidency in 2024, further stoking speculation about his potential...