Economic Policy, Economy and Jobs, US House, coronavirus stimulus, coronavirus recovery
Save for Later
Add to My Front Page
From The Right 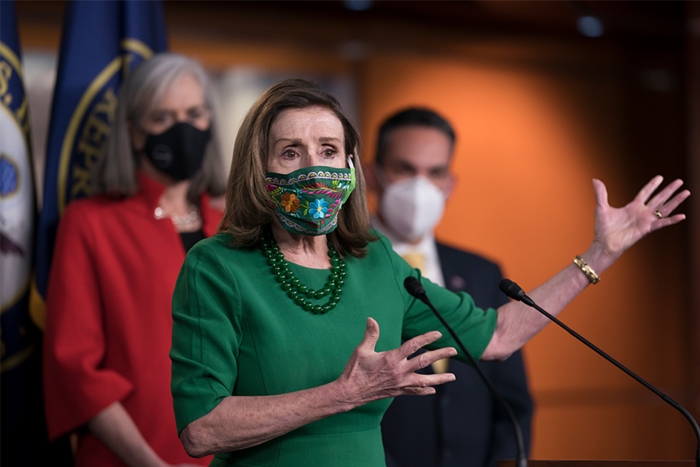 The American Rescue Plan Act passed 219 to 212 just before 2 a.m., garnering not one Republican vote.

Two Democrats, Jared Golden of Maine and Kurt Schrader of Oregon, voted against the measure, which gives $1,400 stimulus checks to adults earning $75,000 or less a year.

NEWS
Biden urges Republicans to back $2tn infrastructure plan: ‘Inaction is not an option’
The Guardian

Federal Reserve Chair Jerome Powell said the US economy is at an "inflection point," and that growth and job creation is poised to accelerate. Powell made...

Biden urges Republicans to back $2tn infrastructure plan: ‘Inaction is not an option’

Joe Biden has made a heartfelt plea for Republicans to work with him on a $2tn infrastructure plan, casting it as essential to preserving America’s superpower...

Senate Democrats just got some wonky procedural news that has some pretty big implications for President Joe Biden’s agenda. On Monday night, the Senate...

Several independent studies show strong bipartisan support for many of the main spending components of the $2.7 trillion American Jobs Plan. Still, those polls...

Joe Biden approaches the 100-day mark of his presidency with a relatively strong job approval rating and the public continuing to express positive views of the...

President Biden and a bipartisan group of lawmakers discussed alternative ways to pay for infrastructure spending, including a smaller increase in the...

Stocks are at all-time highs and the U.S. economy is booming. So why is everyone so freaked out?
ANALYSIS

Peter Andersen, a Boston-based money manager, started 2021 feeling upbeat. “I think this is going to be one of the historic recoveries, up there with the...

President Biden is expected to announce a proposal to nearly double the capital gains tax rate in order to help fund a forthcoming spending package, according...

Welcome to the Biden boom. While the first quarter of 2021 is history, the data are still coming in. “Forecasts” of real economic growth, based on partial data...

America’s national debt now exceeds $123 trillion, according to a new report, or more than four times the official figure of $28 trillion, as calculated by the...