Biden names USPS board of governors nominees, as Democrats put pressure on DeJoy

White House, Joe Biden, Biden Cabinet, Postal Service, USPS
Save for Later
Add to My Front Page
From The Center 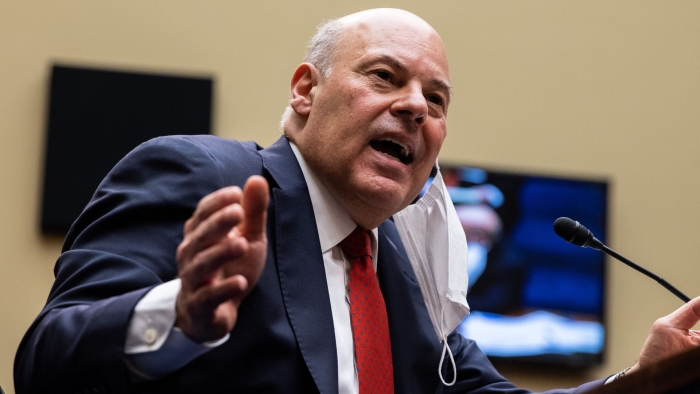 President Biden on Wednesday nominated a former postal union lawyer, a vote-by-mail advocate, and a former deputy postmaster general to sit on the Postal Services' Board of Governors.

Why it matters: The nominations, which require Senate confirmation, come as some Democrats call for Postmaster General Louis DeJoy's ouster and others push for Biden to nominate board members to name a new postmaster general.

If Biden's nominees are accepted, Democrats would hold a majority on the board, per the Washington Post, which first reported this story.

Biden to host bipartisan group of lawmakers for infrastructure meeting as he faces pressure on both...

President Joe Biden will meet with a bipartisan group of lawmakers on Monday afternoon to discuss his roughly $2 trillion jobs and infrastructure proposal, as...

Joe Biden’s campaign promise to work with the GOP is crashing into his political reality: It’s easier to just go around the Republican Party and pass his...

The president’s first choices for district and appeals court openings reflected his campaign promise to choose judges from outside of traditional backgrounds...

White House press secretary Jen Psaki declined to provide a specific date for when the media will get access to Border Patrol facilities temporarily holding...

The shooting of eight employees at a FedEx facility in Indianapolis on Thursday is evidence of an epidemic of gun violence in the United States and underscores...

President Joe Biden could find himself under pressure on Monday to prove his much-touted interest in working with Republicans in Congress, as lawmakers return...

Two House Republicans are demanding that the Environmental Protection Agency provide records related to a decision by the agency’s new leader to remove dozens...

Southern border coordinator Roberta Jacobson’s last day in the Biden White House will be at the end of April before she retires, she announced on Friday....

‘She Was A Child’: White House Calls Fatal Police Shooting Of Black Teen In Ohio ‘Tragic’

President Biden vowed to bridge the partisan political divide but, struggling to garner Republican support for major bills, his administration appears to be...

The White House has revealed the lawmakers it has invited to meet with President Biden and Vice President Harris Monday on their $2 trillion infrastructure...