US Congress, Republican Party, Nancy Pelosi
Save for Later
Add to My Front Page
From The Right 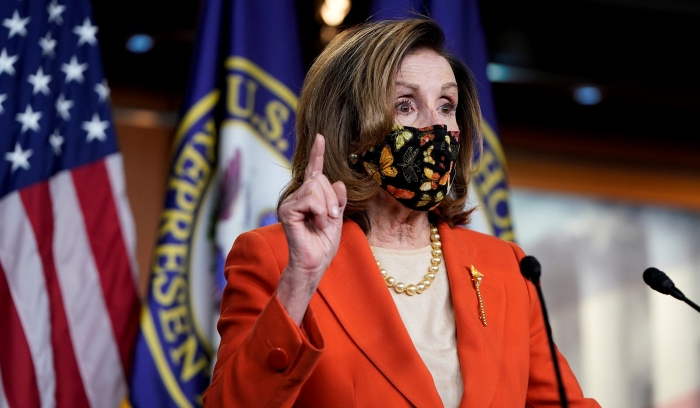 House Republicans on Monday called for Speaker Nancy Pelosi to answer “many important questions” about her “responsibility for the security” of the U.S. Capitol on January 6, when a pro-Trump mob stormed the building.

Republicans on several committees sent Pelosi a letter asking why, among other things, former Capitol Police Chief Steve Sund had his January 4 request for National Guard assistance rejected by former Sergeant at Arms Paul Irving, according to Fox News.

Read full story
Some content from this outlet may be limited or behind a paywall.
US Congress, Republican Party, Nancy Pelosi

Go ad-free! Support AllSides.
About these ads
More news about US Congress
https://www.nationalreview.com/news/house-republicans-question-pelosis-security-decisions-leading-up-to-capitol-riots/

It used to sail through Congress with big, bipartisan votes. But now, it’s been two years since the Senate failed to reauthorize the Violence Against Women...

The Tragic Mediocrity of the U.S. Congress
ANALYSIS

Reptilian. Shameless. Greedy. Nauseating. Criminal. These are the types of adjectives that every so often—the interval between episodes never lasts long—are...

Only Congress Could Give Us a Matt Gaetz
ANALYSIS

Government has none of the measures in place that other workplaces do to deal with bad behavior. Last week, Representative Matt Gaetz tweeted that if he...

The oil industry’s top lobbying group will push Congress for legislation to price carbon emissions across the economy, in a sharp policy turnabout a decade...

President Biden recently held an undisclosed East Room session with historians that included discussion of how big is too big — and how fast is too fast — to...

Democrats are weighing a variety of possible tax increases, including boosting the corporate tax rate and the top marginal income-tax rate on individuals, to...

More than 45,000 bridges rated in poor condition. Hundreds of water main breaking every day. Traffic congestion that, before the pandemic, was adding 54 hours...

The House of Representatives is due to vote Thursday on two immigration bills that would provide a path to citizenship for millions living illegally in the...

Slain Officer Will Lie In Honor In The Capitol Rotunda

The police officer killed during an attack at the Capitol Friday will lie in honor in the Capitol’s Rotunda on April 13, according to a statement. William “...

Sen. Roy Blunt: GOP Would Support $615B in Actual Infrastructure

The Biden administration is making a "big mistake" in loading up a $2.25 trillion infrastructure package with things that do not pertain to roads, bridges,...

Study declares AOC one of the least effective members of Congress

She’s the queen of Twitter — but less successful at lawmaking. Rep. Alexandria Ocasio-Cortez was among the least effective members of the last Congress...

Here in Georgia, we have grown accustomed to dealing with baseless stolen elections claims. We rejected a federal elections takeover when H.R. 1 was first...

Biden press conference: Legislative impasses will depend on Republicans