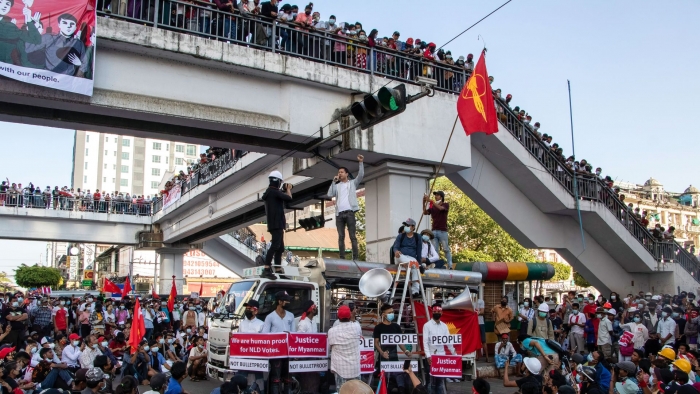 President Biden on Wednesday announced a series of steps in response to last week's military coup in Myanmar, including withholding "$1 billion in Burmese government funds" held in the U.S. and imposing sanctions against the military leaders behind the coup.

The big picture: These are the first sanctions announced by the Biden administration and are part of the president's efforts to re-emphasize democracy and human rights in American foreign policy.

The backstory: The coup came after Myanmar's ruling party, led by Aung San Suu Kyi, won a landslide election victory and was set to consolidate its hold on the country's parliament.

The military claimed the results were fraudulent, declared a national emergency, restored military control and detained top political leaders.
In brief remarks from the White House on Wednesday, Biden reiterated his call for the immediate release of Suu Kyi and the others detained.
He emphasized that the White House was coordinating its response with partners in Asia and members of Congress, including Sen. Mitch McConnell.