Impeachment, US Senate, Impeachment Trial
Save for Later
From The Left 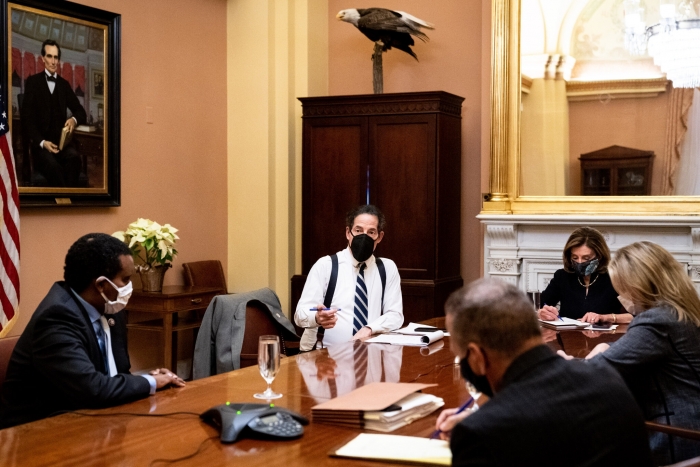 Armed with lessons from Mr. Trump’s first impeachment trial, which even Democrats complained was repetitive and sometimes sanctimonious, the prosecutors managing his second are prepared to conclude in as little as a week, forgo distracting witness fights and rely heavily on video, according to six people working on the case.

It would take 17 Republicans joining every Democrat to find Mr. Trump guilty, making conviction unlikely. But when the trial opens on Tuesday at the very scene of the invasion, the prosecutors will try to force senators who lived through the deadly rampage as they met to formalize President Biden’s election victory to reckon with the totality of Mr. Trump’s monthslong drive to overturn the election and his failure to call off the assault.

“The story of the president’s actions is both riveting and horrifying,” Representative Jamie Raskin, Democrat of Maryland and the lead prosecutor, said in an interview. “We think that every American should be aware of what happened — that the reason he was impeached by the House and the reason he should be convicted and disqualified from holding future federal office is to make sure that such an attack on our democracy and Constitution never happens again.”

In making Mr. Trump the first American president to be impeached twice, Democrats have essentially given themselves an unprecedented do-over. When Representative Adam B. Schiff, Democrat of California, was preparing to prosecute Mr. Trump the first time for a pressure campaign on Ukraine, he read the 605-page record of President Bill Clinton’s 1999 impeachment trial cover to cover, sending aides as many as 20 dispatches a day as he sought to modernize a proceeding that had happened only twice before.

This time, a new group of nine Democratic managers need reach back only a year to study the lessons of Mr. Schiff’s prosecution: Don’t antagonize Republicans, use lots and lots of video and, above all, make succinct arguments to avoid lulling the jury of lawmakers into boredom or distraction.

Read full story
Some content from this outlet may be limited or behind a paywall.
Impeachment, US Senate, Impeachment Trial

Analysis
The 6 Senate Republicans to watch on impeachment
Vox