Biden Is Catholic. He Also Supports Abortion Rights. Here's What That Could Mean 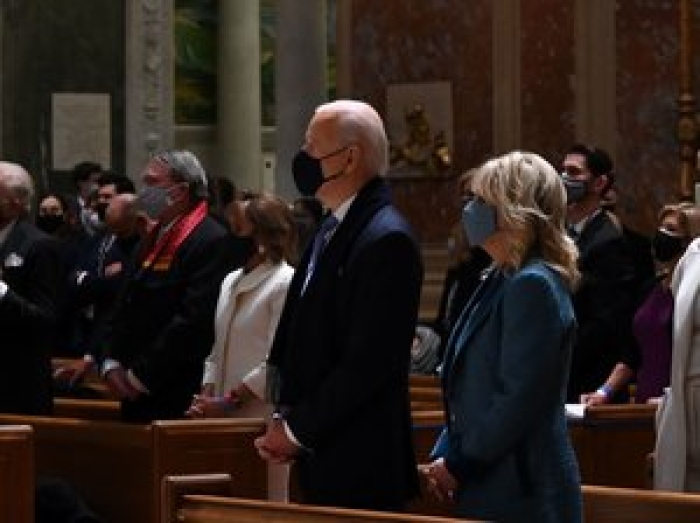 Joe Biden is only the second Catholic president of the United States. He's also a supporter of abortion rights — a position at odds with official teachings of the Roman Catholic Church.

For some Catholic activists, like Marjorie Dannenfelser, Biden's high-profile example of a Catholic who supports abortion rights is troubling.

"It's a negative example of a deep and important moral issue that is being debated in this country," she said.

A Catholic Sinner Seeks Communion—And Happens to Be President
OPINION

Father kevin gillespie and the staff at Holy Trinity Catholic Church find out that President Joe Biden is coming to Mass an hour and a half ahead of time. For...

Biden Will Repeal One Of Trump's Major Anti-Abortion Policies

President Joe Biden will repeal a major anti-abortion policy instated by the Trump administration by executive order Thursday, making it easier for...

This Is the Case That Could Bring Down Roe v. Wade

Amy Coney Barrett has only been a Supreme Court justice for a little over a month, but the high court is already facing a case that could give the conservative...

Tennessee lawmakers proposed a bill that would allow biological fathers of an unborn child to prevent mothers from getting an abortion. The bill was...

South Carolina Gov. Henry McMaster (R) signed a bill into law on Thursday banning most abortions in the state. Driving the news: Planned Parenthood filed a...

President Biden signed two executive actions Thursday that are designed to expand access to reproductive health care and health insurance through the...

South Carolina Governor Henry McMaster (R) signed a heartbeat bill into law on Thursday, which prohibits abortion after a preborn’s heartbeat can be detected,...

Last week, just as Texas was set to officially defund Planned Parenthood, a district judge in Travis County sided with a complaint from the abortion group and...

A new Knights of Columbus/Marist Poll finds that 76% of Americans, including 55% who identify as pro-choice, support “significant restrictions” on abortion...

The White House announced Thursday morning that President Biden will sign an executive order rescinding a rule known as the Mexico City policy which prohibits...