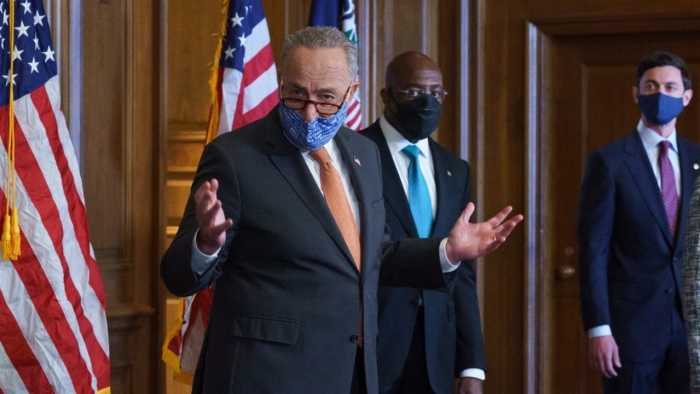 The timeline was sought by Senate Minority Leader Mitch McConnell, who argued that the ex-president’s legal team should be given sufficient time to prepare for the trial.

The House will send the impeachment article, which charges Trump with inciting the Jan. 6 insurrection at the Capitol, on Monday night, and senators will be sworn in on Tuesday.

The Manhattan District Attorney's Office has obtained former President Donald Trump's tax records, executing a subpoena for the long-sought documents after the...

In one morning, the Supreme Court looked to rid itself of the Trump era
ANALYSIS

Donald Trump took a drubbing at the Supreme Court on Monday, as the justices in a flurry of orders dealt critical blows to his efforts to shield his tax...

Biden is locking up migrant children. Will the world still care with Trump gone?
OPINION

This week, the Biden administration did the unthinkable. It reopened a Trump-era detention site for migrant children. The detention center, a reconverted camp...

In many ways, Merrick Garland’s Monday confirmation hearing for Attorney General was almost exactly what his 2016 hearing for the Supreme Court would have been...

Trump plans to use his CPAC speech as a 'show of force' to exert control over the GOP,...

Former President Donald Trump plans on using his upcoming speech at the Conservative Political Action Conference (CPAC) as a "show of force" to exert control...

Prepare For A Deluge Of Dishonest CPAC Coverage

Over the next few days, we’re going to see a slew of essays and think pieces from the corporate press about how the Conservative Political Action Conference,...

Top Republicans are split on President Trump’s first post-presidential appearance at a key meeting of conservatives in Florida this week. “I don’t believe...