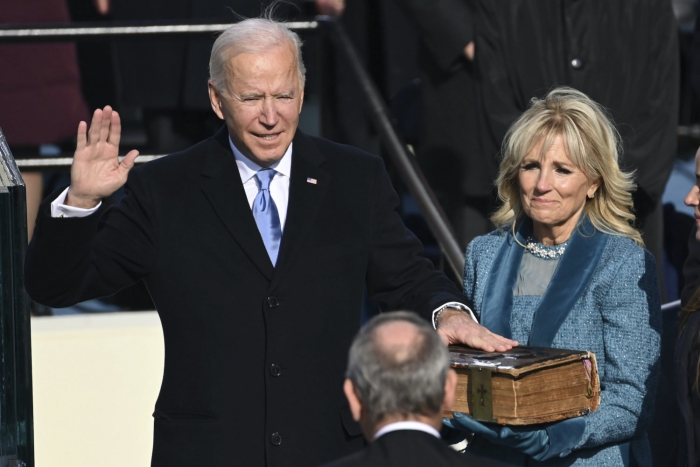 It was an inauguration like none before, squeezed between massive security and a pandemic that has killed over 400,000 Americans.

Instead of crowds, a sea of American and state flags filled the National Mall in Washington.

Armed National Guardsmen replaced cheering supporters along Pennsylvania Avenue, the traditional parade route from the Capitol to the White House.

Instead of 200,000 guests, a scant 1,000 — seated in pairs of folding chairs placed at least 6 feet apart — watched in person as President Joe Biden and Vice President Kamala Harris swore...

“The vast majority of the people, the 11 million undocumented, they’re not Hispanics. They’re people who came on a visa, [were] able to buy a ticket to get on...

I learned about the pilot test of Twitter’s new crowdsourced misinformation-labeling program the same way I learn about most news events that are relevant to...

Are gas prices going up? And is it Joe Biden’s fault?
ANALYSIS

There’s been chatter online recently about the recent spike in gasoline prices — and whether President Joe Biden is to blame. One Facebook post features a...

Q: Do the COVID-19 vaccines cause infertility? A: There’s no evidence that approved vaccines cause fertility loss. Although clinical trials did not study...

Controlling the spread of misinformation

Misinformation on COVID-19 is so pervasive that even some patients dying from the disease still say it’s a hoax. In March 2020, nearly 30% of U.S. adults...

How to Spot a Deepfake Without Even Watching the Video

Deepfakes are videos that glue one person’s face onto another’s body, making the former look like they’re saying or doing something that they never actually...

Theodor Seuss Geisel, or Dr. Seuss, was well known for children’s books like “The Lorax,” which contained progressive messages about the environment and more...

Glenn Kessler fact-checks Republicans for a living at the Washington Post, but on Sunday, he got a fact-checked for improperly accusing former President Trump...