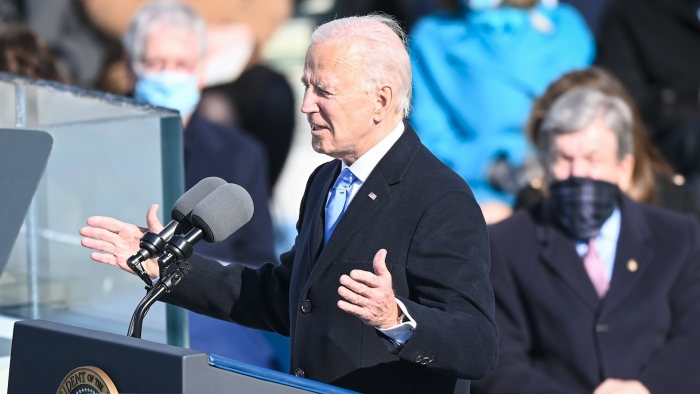 President Biden declared in his inaugural address that our prospects for much-needed “unity” are threatened by various political forces. Among them, he said, are racism, nativism, political extremism, white supremacy and domestic terrorism.

Republicans promptly decided that in condemning those things, Biden was actually talking about them.

Republican officials and their media allies are now widely condemning these words as an attack on themselves and their voters. The obvious trick is to game the media into saying Biden is already reneging on his unity promise by being divisive.

After years of shrugging off Trump’s lack of interest in working with Democrats, the press suddenly...
OPINION

“I actually don't necessarily think that he has to reach out to the people that didn't vote for him,” said CNN chief political correspondent Dana Bash in...

Throughout his candidacy and into his presidency, Joe Biden pledged to seek national unity, a call heard in many democracies. He even tried to fend off doubts...

What Americans Think About The GameStop Investors

America loves a good underdog story — and that’s exactly what it got in late January, when a plucky band of netizens on Reddit’s r/wallstreetbets message board...

What Bruce Springsteen's Super Bowl ad gets right about reuniting Americans in 'the...
OPINION

There’s a lot of talk about “the middle” these days, about finding agreement with our political opposites. It’s a noble idea, but what does it really look like...

Sen. Mitt Romney is praising Capitol Police Officer Eugene Goodman for directing him to safety during the Capitol riot after video of their encounter emerged...

Across a great spectrum of issues, from trade to military policy to entitlements, the policy preferences of the populist Right broadly overlap with those of...

On Tuesday, six days into the Biden administration, it became clear why Susan Rice, hitherto a foreign policy specialist, was named director of the Domestic...