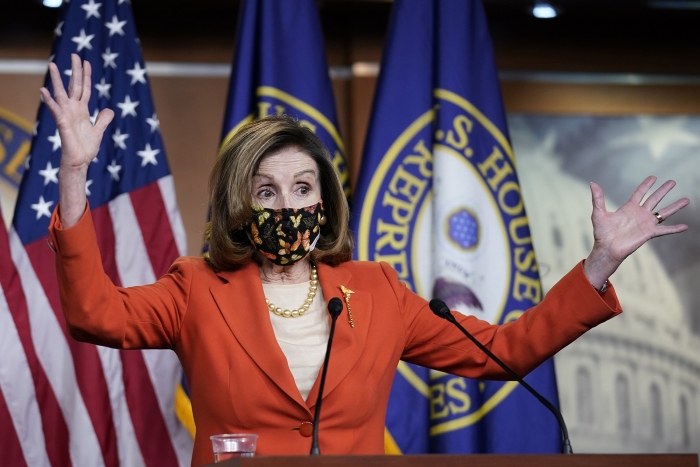 House Speaker Nancy Pelosi said lawmakers are preparing for President Trump’s impeachment trial — but remained tight-lipped on when the single article will be transferred to the Senate.

On Wednesday, the Democrat-controlled House of Representatives impeached Trump for the second time, charging him with inciting an insurrection after the US Capitol was stormed by his supporters in a riot that left five people dead.

Go ad-free! Support AllSides.
About these ads
More news about US House
https://nypost.com/2021/01/15/pelosi-wont-say-when-trump-impeachment-articles-will-be-handed-to-senate/

The House approved President Joe Biden’s $1.9 trillion pandemic rescue plan in a 219 to 212 vote early Saturday morning, sending the measure to the Senate as...

At any other time, the imminent House passage of a gargantuan $1.9 trillion bill that addresses many of the foundational goals of a new presidency would be...

A House committee early on Wednesday approved a portion of the Democratic coronavirus relief proposal which includes a $15 per hour minimum wage. The...

Democrats Can't Use Reconciliation To Pass a $15 Minimum Wage. Here's What They Might Do...
ANALYSIS

Democrats won't be able to use a shortcut around the Senate's filibuster rules to pass a $15 federal minimum wage with a simple majority—but Sen. Bernie...

The Democrat-controlled House on Thursday passed the Equality Act, sweeping legislation that would add sexual orientation and transgender status as protected...

House Republicans held a summit this past weekend in Salt Lake City, Utah, to discuss how to position themselves to address climate change in the new Congress...