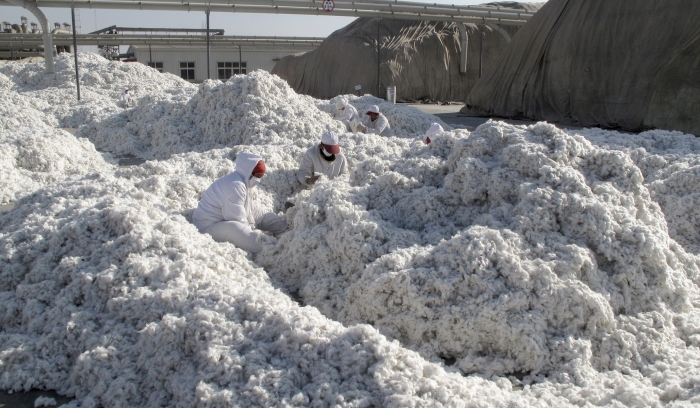 U.S. Customs and Border Patrol issued a ban on imports of cotton and tomatoes from the Xinjiang region in China, citing Beijing’s use of forced labor.

Around 20 percent of the world’s cotton is picked in Xinjiang, and the region is also a major exporter of tomatoes, which are used to make ketchup for the U.S. market. The U.S. imported $9 billion in cotton products and $10 million in tomatoes from China during the past year.

It took just three months for the rumor that COVID-19 was engineered as a bioweapon to spread from the fringes of the Chinese internet and take root in...

Many Americans and hundreds of millions of people across Asia were celebrating the Lunar New Year on Friday, kicking off the Year of the Ox. In China, the...

Unlikely that Covid came from Wuhan lab, WHO says

It is “extremely unlikely” that the coronavirus leaked from a lab in the Chinese city of Wuhan, where Covid-19 first emerged, according to the head of a team...

On January 30, 84-year-old Vicha Ratanapakdee, a Thai grandfather who his family described as “nearly blind, gentle person, [and] beloved,” died as a result of...

Latin American Governments Are Caught in the Middle of the U.S.-China Tech War
ANALYSIS

For most policymakers in Latin America, the best way to react to growing geopolitical tensions between the United States and China is obvious: Stay neutral....

Hong Kong police on Sunday detained 47 pro-democracy activists on charges of conspiracy to commit subversion under the city’s national security law. The...

As Beijing’s power grows, can it shift meaning of ‘human rights’?

The Beijing Winter Olympics may be a year away, but China’s official media has already shown leader Xi Jinping in a fur hat and long coat, inspecting ski...

Anatomy of a conspiracy: With COVID, China took leading role

The rumors began almost as soon as the disease itself. Claims that a foreign adversary had unleashed a bioweapon emerged at the fringes of Chinese social media...

A top State Department nominee is a defender of the Confucius Institute, a Chinese government program that disseminates pro-Beijing propaganda on American...

Hawley calls for breakup of Big Tech ‘oligarchs,’ companies that ‘sold us out to China’

Sen. Josh Hawley of Missouri on Friday urged fellow Republicans to support the break-up of Big Tech “oligarchs” that censor political viewpoints as well as...

Momentum is building among members of Congress to boycott the 2022 Winter Olympics in Beijing. A new House resolution, introduced Wednesday by Reps. Michael...

Jake Sullivan criticizes China’s transparency on COVID-19 origin but declines to stand by US...

The Biden administration and its corporate media cheerleaders are at pains to tell you that career-long China kowtower Joe Biden is “tough on China.” But...