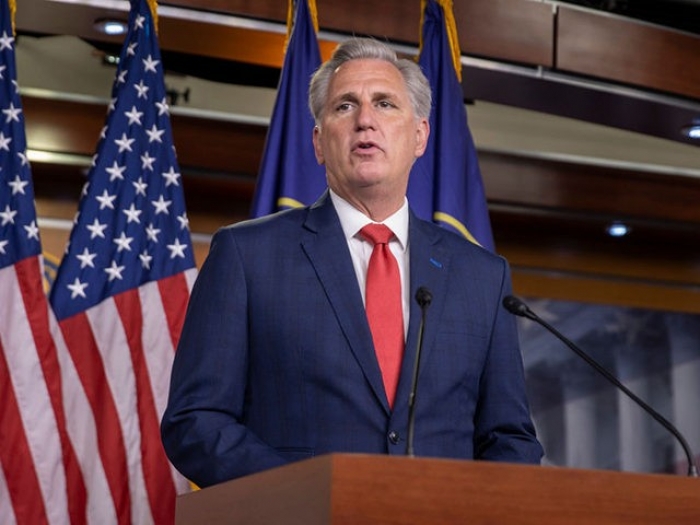 House Democrats have called for articles of impeachment against President Donald Trump to remove the 45th president from office after riots at the Capitol building erupted this week.

McCarthy condemned the violence that erupted on January 6. However, he said that movements to remove Trump from office before January 20 would only further harm the country.

There’s a war on The Muppets. And “The Cat and the Hat!” But Biden is busy. He has no time for all that. Over the past few weeks, Republicans have simmered...

Hours after the U.S. crossed the threshold of 500,000 deaths from COVID-19, President Biden commemorated the lives lost over the past year on Monday night. No...

The nomination of Neera Tanden to head the powerful Office of Management and Budget appears increasingly imperiled, with Sens. Susan Collins of Maine and Mitt...

President Biden’s allies say that with the distraction of the impeachment trial of his predecessor now over, he will quickly press for passage of his $1.9...

When will Biden hold a press conference?
OPINION

After a Tuesday appearance on his administration’s response to covid-19, President Biden took a couple of questions from the assembled media. When would things...

The Pentagon has released a biting report of the conduct of Texas Republican Rep. Ronny Jackson during his tenure as White House physician in the Trump...

Nearly 1 in 5 adults and nearly half of Americans 65 and older have received their first dose of the coronavirus vaccine, White House senior adviser Andy...

Biden names USPS board of governors nominees, as Democrats put pressure on DeJoy

President Biden on Wednesday nominated a former postal union lawyer, a vote-by-mail advocate, and a former deputy postmaster general to sit on the Postal...

President Joe Biden plans to work with Congress to repeal the war authorizations behind U.S. military operations around the world over the past 20 years and to...

Will the real president of the United States please stand up?
OPINION

Can anyone just tell us who the hell is running our federal government right now? You literally get censored out of existence for suggesting that anyone...

White House defends Biden 'Neanderthal' quip as 'a reflection of his frustration...

The White House is standing by President Biden for accusing Republican governors who have lifted coronavirus business restrictions and ended mask orders of "...

President Biden on Thursday celebrated the House passing a sweeping election reform bill, saying he would sign it if it passes the Senate. Biden called it "...