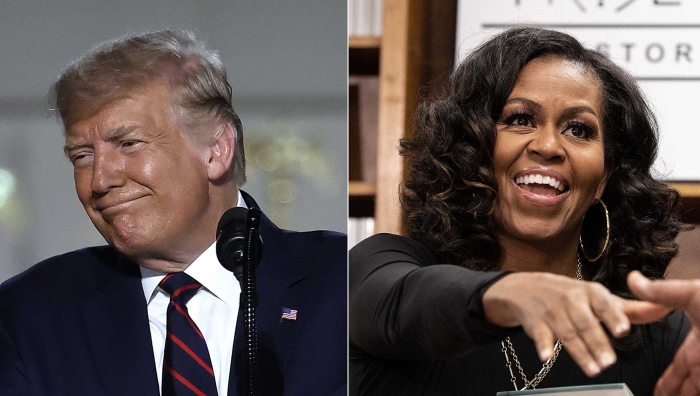 Americans are most likely to name President Donald Trump and Michelle Obama as most admired man and woman in 2020. Trump tied former President Barack Obama for the honor last year but edged out his predecessor this year. Trump's first-place finish ends a 12-year run as most admired man for Obama, tied with Dwight Eisenhower for the most ever.

Meanwhile, Michelle Obama ranks as most admired woman for the third year in a row. Vice President-elect Kamala Harris is second.

There’s a war on The Muppets. And “The Cat and the Hat!” But Biden is busy. He has no time for all that. Over the past few weeks, Republicans have simmered...

2020 was the worst year for democracy in recent history
ANALYSIS

The health of American democracy is in rapid decline, India is no longer a free country, and at most 20 percent of the world’s population lives in a liberal...

After a high school cheerleader in Pennsylvania dropped a series of F-bombs about her school in a Snapchat post over a weekend in the spring of 2017, she was...

Nod or blunder? No CPAC 2021 apology for a stage shaped like a white supremacist symbol
OPINION

It’s been said that you should never attribute to malice what can be explained by stupidity. Applying this maxim to the Conservative Political Action...

Amid growing calls to advance LGBTQ rights, conservative religious freedom advocates are scrambling to avoid potential fallout for people of faith. In so...

While the Democratic Party pulled off a complete (albeit narrow) victory over Donald Trump and the Republican Party in 2020, they lost ground with nonwhite...

The cancel culture bells have tolled for Dr. Seuss, the beloved author of children's books like Green Eggs and Ham, How the Grinch Stole Christmas, and Oh, the...