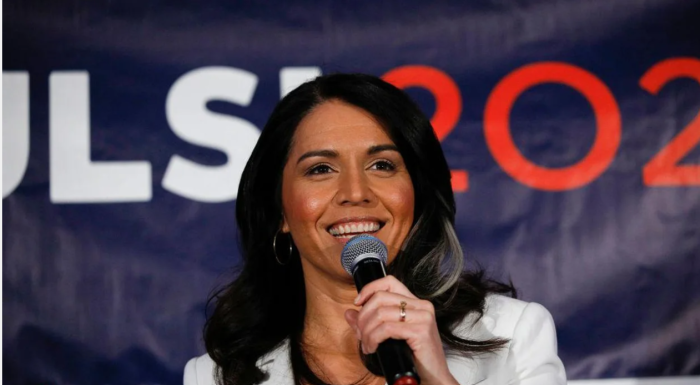 Trump on Tuesday threatened to veto the National Defense Authorization Act, a bill to authorize defense spending, demanding that Congress first reform Section 230 of the Communications Decency Act. The law protects web publishers from being sued for content posted on their platforms by third parties.

Rep. Tulsi Gabbard is suspending her longshot campaign for the Democratic presidential nomination and throwing her support behind former Vice President Joe...

The controversial Democrat has dropped out of the presidential race. Hawaii Rep. Tulsi Gabbard’s longshot presidential bid is over. Gabbard’s decision to...

While Tulsi Gabbard’s national polling is hovering at around 1%, she’s winning the Fox News Democratic primary by a long shot. The Hawaii congresswoman, who...

Representative Tulsi Gabbard, a Hawaii Democrat and 2020 presidential candidate, broke with most members of her party on Wednesday and voted “present” on the...

‘I’m a weird one’: Tulsi Gabbard draws unusual mix of fans on the road

Tulsi Gabbard arrived late for her own campaign event at the Salt Hill Pub in Lebanon, New Hampshire. It meant she had to weave her way through the crowd of...

Tulsi Gabbard announced Thursday that she will suspend her 2020 Democratic presidential campaign and endorsed Joe Biden. The state of play: While she was...

Gabbard calls on Biden, Sanders to help put her on debate stage

Rep. Tulsi Gabbard (D-Hawaii) and Rep. Markwayne Mullin (R-Okla.) have introduced a bill to Congress that would “protect women’s sports” based on participants...

After a year of barely cracking 1% support in national polls, Rep. Tulsi Gabbard ended her presidential campaign. That the Hawaii congresswoman finally...