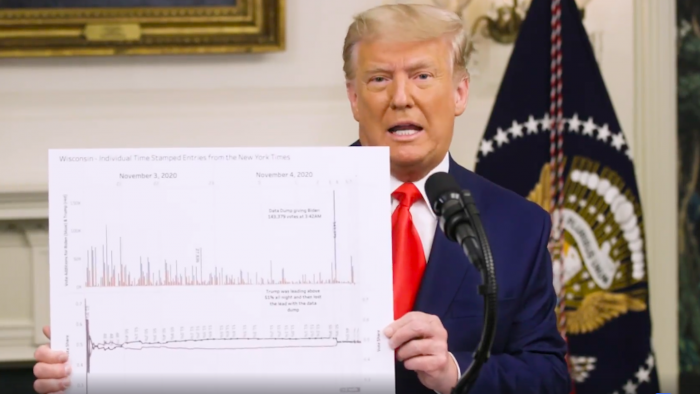 President Trump posted a bonkers 46-minute tirade on Facebook Wednesday full of wild-eyed, nonsensical conspiracy theories about the 2020 election—the kind that members of QAnon have embraced.

Trump repeatedly rehashed baseless accusations of fraud and pointed to large charts showing vote-count totals that he claimed, bizarrely, proved his point, when in fact they did nothing of the sort. He wrongly pointed to Republican victories in Congress as evidence that it should appear unlikely that Trump lost while they won.

NEWS
Since The Capitol Attack, Trump’s Approval Rating Has Plummeted At A Record Rate
FiveThirtyEight

As one of its last acts, the Trump administration has set in motion the transfer of sacred Native American lands to a pair of Anglo-Australian mining...

With less than a week to go in the Trump White House, staffers are reportedly frantically looking for their next gig. They’re not having a lot of luck....

In Cleveland County, Okla., the chairman of the local Republican Party openly wondered “why violence is unacceptable,” just hours before a mob stormed the U.S...

In the early morning hours of Nov. 4, 2020, President Donald Trump told possibly the most consequential falsehood of his life. The lie was that he had been...

Since The Capitol Attack, Trump’s Approval Rating Has Plummeted At A Record Rate
ANALYSIS

In the wake of the Jan. 6 assault on the U.S. Capitol, public opinion is souring quickly on President Trump as he enters the final days of his term. Not only...

Should Trump be allowed back on social media after he leaves office? Half of Americans say yes
DATA

Less than a week after President Donald Trump was banned from major social media platforms for continuing to spread misinformation credited with inciting...

Donald Trump was impeached again on Wednesday, a week before leaving office in one of the great travesties of modern politics. Here are reasons why the...

Political polarization and hyperpartisanship are tearing America apart. Big Tech’s purge of President Trump and other right-wing voices will only make this...

Twitter CEO Jack Dorsey acknowledged in a statement on Wednesday evening that his company’s decision to ban President Donald Trump from the platform set a “...

U.S. Customs and Border Patrol issued a ban on imports of cotton and tomatoes from the Xinjiang region in China, citing Beijing’s use of forced labor....