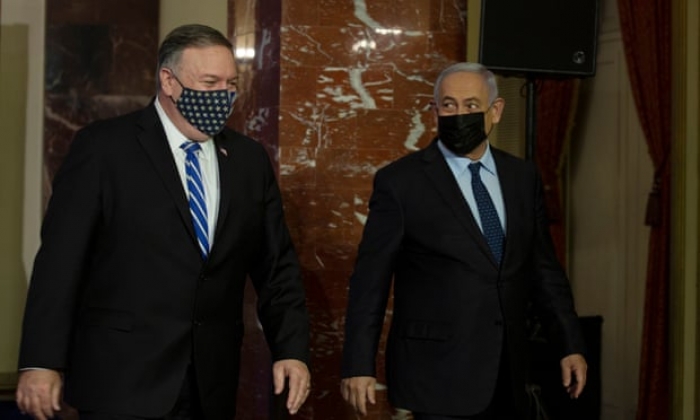 Israel’s military occupation has received a symbolic US stamp of approval after Mike Pompeo toured an archaeological dig run by a far-right settler group and visited a settlement that farms grapes on land Palestinians say was stolen from them.

The trips on Wednesday and Thursday marked the first time a US secretary of state had officially visited settlements, a deeply provocative move that previous American administrations went to lengths to avoid.

Pompeo, who has been tipped to pursue a presidential bid in four years and whose base includes fervently pro-Israel evangelical Christians, flew by helicopter to Psagot Winery, which produces, among many wines, a blended red named in his honour.

The vineyard operates out of two settlements, Psagot, and its new location Sha’ar Binyamin, both of which are on land Palestinians say was taken from them.

Tamam Quran, a 25-year-old Palestinian high-school teacher who has American citizenship and claims part ownership of the land, said her grandmother used to pick grapes from the vines in Psagot, which Palestinians call Jabal al-Taweel.

“Growing up a five-minute walk from where we are here now, I woke up every morning to the settlement,” she said, speaking on Wednesday at a protest against the trip. Pompeo’s visit, she added, sent a message that if you have enough power, “nothing is going to happen, there are no consequences to your actions”.

Speaking at a press conference in Jerusalem on Thursday with the Israeli leader, Benjamin Netanyahu, Pompeo said the state department had historically taken “the wrong view of settlements”, which he claimed “can be done in a way that [is] lawful, appropriate and proper”.

A majority of world powers consider settlements as illegal under international law.