Under Biden, State Department needs to be rebuilt. But better.

Joe Biden, State Department
Save for Later
From The Center 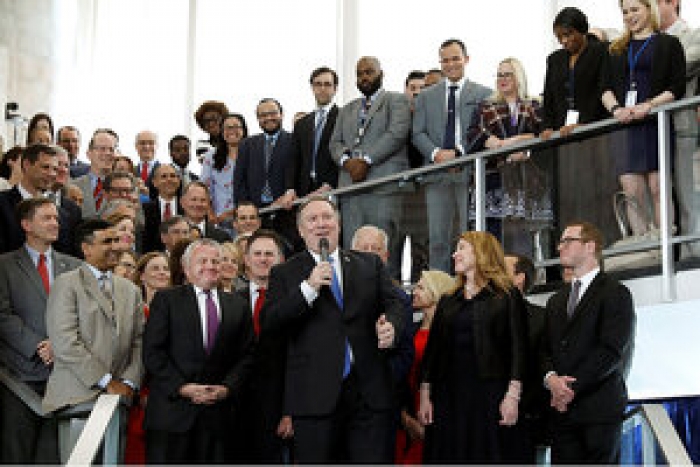 Over recent years, “build back better” has become the mantra of reconstruction teams looking to rebuild communities devastated by natural disasters, from earthquakes to hurricanes, but in smarter, more sustainable ways.

Now the transition team for President-elect Joe Biden is applying the guiding slogan of disaster recovery, which he employed during his campaign in reference to the entire United States economy, to the rebuilding of federal government agencies and departments.

And, say U.S. diplomats, former ambassadors, and foreign policy experts, perhaps in no case is the “rebuild, but better” concept more pertinent and urgent than with the State Department.

Hollowed out, demoralized, sidelined, politicized, even mortally damaged – all are among the descriptions that have been used to sound the alarm over the foundering and deteriorating conditions of the nation’s diplomatic infrastructure.

Calls for significant reform and revitalization of the State Department have been around for at least a decade, but the alarm bells have rung louder and sharper after what many have seen as President Donald Trump’s assault on federal institutions and disdain for what he considers the “deep state.”

At the State Department, large numbers of key senior positions and ambassadors’ chairs have gone unfilled, while junior and mid-level career officers – particularly women and minorities – have left the department in an unprecedented wave that has weakened the U.S. presence abroad.

Moreover, in recent years positions that have been filled have increasingly gone to political appointees, weakening the draw of a nonpartisan foreign service career.

“Not just a reset”
But even as a new team prepares to take the reins in Washington, there is wide recognition that just returning to where the State Department was before Mr. Trump is not the answer to the woes.

“The State Department is like a town that gets hit by a strong earthquake, and you realize it didn’t take long to destroy it,” says Barbara Bodine, a former ambassador to Yemen who is now director of the Institute for the Study of Diplomacy at Georgetown University. “But then you use that [realization] to ask, ‘How do we come back better, and stronger?’”

Referring to a Council on Foreign Relations report issued this month that lays out a path for rebuilding the State Department, Ambassador Bodine adds: “As the CFR report concluded, it’s about transformation, not just a reset. We need an organization and diplomats to meet the global challenges of this century.”

The CFR report is just one of the guides being used by the group within the Biden transition team that is focused on the State Department and revitalizing American diplomacy more broadly, sources close to the team say.

Other resources include a string of commentaries by former Deputy Secretary of State Bill Burns and a bipartisan congressional working group promoting a transformation of American diplomacy. Mr. Burns recently declared the damage at the State Department “worse” than many people thought, even as he deemed the low state of State an “opportunity” to build a 21st-century diplomatic service.

What won’t work, some former officials say, is a kind of knee-jerk reaction that focuses simply on reversing actions taken under President Trump while ignoring longstanding problems. Those range from a stagnant bureaucracy and an organization tailored to the 20th century, to a “pale, male, and Yale” culture that fails to value the advantage that America’s diversity provides in a globalizing world.

“This can be the moment for much-needed reform, but it won’t be successful unless it includes an honest evaluation of the problems that preceded Trump,” says Bruce Jentleson, a former State Department senior adviser for policy planning who is now a professor of political science at Duke University in Durham, North Carolina. “There needs to be a mix that addresses both the long-standing problems and the Trumpian impact.”

An inviting career path
For example, some of the factors that have taken the shine off a diplomatic career – bureaucratic lethargy, a sense that one can have a more impactful career in the private sector or nongovernmental organization world, a failure to adapt the foreign service to two-career families – have hobbled the State Department for well over a decade, Professor Jentleson says.

Others agree, but underscore that special attention must be given to problems that increasingly discourage young people aspiring to a career in global affairs from considering the foreign service in the first place.

Noting that the number of candidates taking the foreign service exam has fallen by half over the last decade, Rachel Kyte, dean of Fletcher, The Graduate School of Global Affairs, at Tufts University, says the State Department’s growing politicization and falling diversity are turning off “young people who want to make a difference in the world.”

“You can engage with the world and build a global career in many different ways now, and the diplomatic corps is not going to be the first choice if young people see the politicization of more and more posts reaching farther and farther down into the ranks,” says Dean Kyte. “The impact will be to rob diplomacy of the professional depth you need as the political winds blow in different directions.”

What critics call the “hollowing out” of the State Department got going with a 2017 hiring freeze imposed by President Trump’s first secretary of state, Rex Tillerson. He also moved to remake top management with his own team, causing more than 100 of about 900 senior foreign service officers to be fired, quit, or retire.

Mr. Tillerson’s replacement, Mike Pompeo, was greeted with sighs of relief when he lifted the hiring freeze in 2018. But critics say Secretary Pompeo doubled down on the department’s politicization, favoring political appointments over career foreign-service officers for senior positions and ambassadorial appointments, and notably failing to support career personnel in the context of President Trump’s impeachment.

A successful reform will include “recognizing once again that diplomacy is a profession, not a doggie treat you give to your major donors,” says Ambassador Bodine.

A signal on diversity
Another problem is the dwindling diversity at the State Department in recent years, even as the U.S. population has only grown more diverse. The number of U.S. ambassadors who are Black has fallen from 20 to 5, to cite one example, while currently no senior positions, like assistant secretary, are held by Black office holders.

“I’ve had students and alumni tell me they were concerned that the foreign service wasn’t a career where they would be fully welcomed, and so they turned elsewhere,” says Dean Kyte. “That’s not how you make the State Department a place where the brightest want to go.”

One development convincing some that Mr. Biden is serious about addressing the diversity deficit is that former career diplomat Linda Thomas-Greenfield is heading up the transition team’s State Department group. As assistant secretary for the Bureau of African Affairs, Ambassador Thomas-Greenfield was the department’s highest ranking Black official when she retired in 2017.

She has remained vocal on diversity’s role in revitalizing U.S. diplomacy ever since.

Building a better State Department will mean beefing up its expertise in the 21st century’s key “transnational” challenges, including climate change and cybersecurity, says Ambassador Bodine. Innovative and independent thinking about solutions to global challenges “has been submerged out of a fear of being seen as not with the program,” she says. “That really has to change.”

In Congress, Democratic Rep. Joaquin Castro of Texas has led the charge on State Department reform – concurring that today’s global challenges like climate change must be part of U.S. diplomacy’s refurbishment, but adding that opportunities in diplomatic careers for training and remaining abreast of global issues must be expanded.

Yet as important as internal reform will be, some emphasize that a successful rebuild of the State Department will ultimately hinge on an all-of-society support for diplomacy and recognition of its vital role in addressing the transnational issues the U.S. faces.

“We’ve ended up at a place where we undervalue diplomacy, even though, if you think about it, our greatest successes over the last 30 to 40 years have been through diplomacy,” says Professor Jentleson. “We need to recognize that and build from that foundation.”

Read full story
Some content from this outlet may be limited or behind a paywall.
Joe Biden, State Department