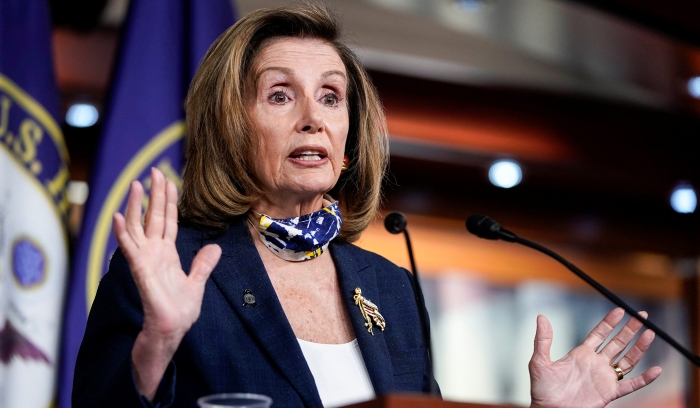 House Democrats nominated Nancy Pelosi (D., Calif.) to another term as House Speaker on Wednesday, with no other representative competing for the post, and she must now prevail in a floor vote in January to officially retain the gavel.

Pelosi has served as House Speaker from 2007 to 2011 and again from 2019 to the present. Democrats also nominated House Majority Leader Steny Hoyer of Maryland and Majority Whip James Clyburn of South Carolina to additional terms.

Go ad-free! Support AllSides.
About these ads
More news about US House
https://www.nationalreview.com/news/lacking-an-alternative-house-dems-tap-pelosi-to-stand-for-speaker/

The House, with some G.O.P. support, impeaches Trump for ‘incitement of insurrection,’ setting up a...

The House on Wednesday impeached President Trump for inciting a violent insurrection against the United States government, as 10 members of the president’s...

The House set itself on a course to impeach President Trump on Wednesday for a historic second time, planning an afternoon vote to charge him just one week...

The House is poised to vote Tuesday evening to formally call on Vice President Mike Pence to strip President Trump of his duties by invoking the 25th Amendment...

House votes to override Trump’s veto of defense bill, setting up first such rebuke during his...

The House voted Monday to reject President Trump’s veto of a $741 billion defense authorization bill, setting up the first congressional override of his...

Speaker Nancy Pelosi said during her weekly press conference Thursday that she believes the bipartisan group of lawmakers engaged in negotiations over a...

The House voted to impeach President Trump for an unprecedented second time on Wednesday, alleging he encouraged a mob to storm Congress as part of a last-gasp...

The House prepared to vote to impeach President Trump on Wednesday afternoon for an unprecedented second time, alleging he encouraged a mob to storm the U.S....

House To Vote On 25th Amendment Resolution Against Trump

The House of Representatives is expected to vote Tuesday on a resolution calling for Vice President Pence to invoke the 25th Amendment against President Trump...

Nancy Pelosi wonders why there 'aren't uprisings' across nation: 'Maybe there...

House Minority Leader Nancy Pelosi told reporters on Thursday that she is confused why Americans aren’t “uprising” against the Trump administration over...

House impeaches Trump a second time, but conviction and removal are unlikely

The House impeached President Trump for the second time Wednesday, charging him for behavior they believe caused the violent Jan. 6 attack on the U.S. Capitol...

The House convened Wednesday for what will be the speediest impeachment of a president in history, with a vote planned by mid-afternoon charging the president...