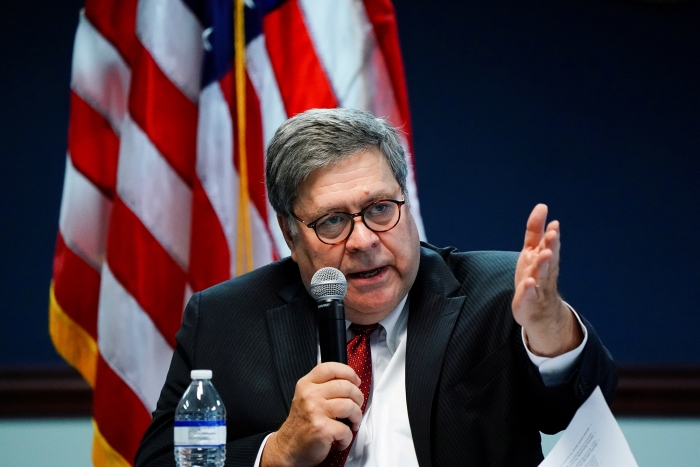 Attorney General Bill Barr has authorized a Justice Department probe of allegations of “voting irregularities” — despite little evidence of voting fraud in the 2020 presidential election, a report said Monday.

The Associated Press reported the move by Barr Monday evening, but did not provide specifics on what the probe would focus on or what allegations they would investigate.

President Trump and his personal attorney Rudy Giuliani have repeatedly made broad allegations of voter fraud in a number of states, but have not provided evidence for their claims.

Facebook will begin removing all content that mentions the phrase "stop the steal," a full 69 days after Election Day. The social media giant said in a blog...

The U.S. Capitol descended into chaos Wednesday as hundreds of pro-Trump protesters swarmed the building and at least one person was shot, forcing the Senate...

Even before polls opened Tuesday for the Senate runoffs in Georgia, Latinos had shattered their best turnout numbers for previous runoff elections. But with...

President Trump, in an hourlong telephone call with Georgia’s Republican secretary of state, repeated a number of false and misleading claims about election...

The publisher of The Epoch Times, a stridently pro-Trump publication with a flair for conspiracy theories and links to Chinese dissidents, nearly quadrupled...

Dominion Voting Systems filed a defamation lawsuit against attorney Sidney Powell over her baseless claims that the company, which manufactured electronic...

A chaotic and violent scene unfolded at the Capitol on Wednesday as supporters of President Trump swarmed the building, forcing a lockdown and various...

On Monday, the Supreme Court ruled for the state of Texas and against the Texas Democratic Party, as they decided to leave in place a lower court ruling that...

Memorandum: How The 2020 Election Could Have Been Stolen
OPINION

As a citizen who is also a political scientist, I have tried to do due diligence to assess what happened in the recent election. Who won what and at what level...