Esper, on his way out, says he was no yes man 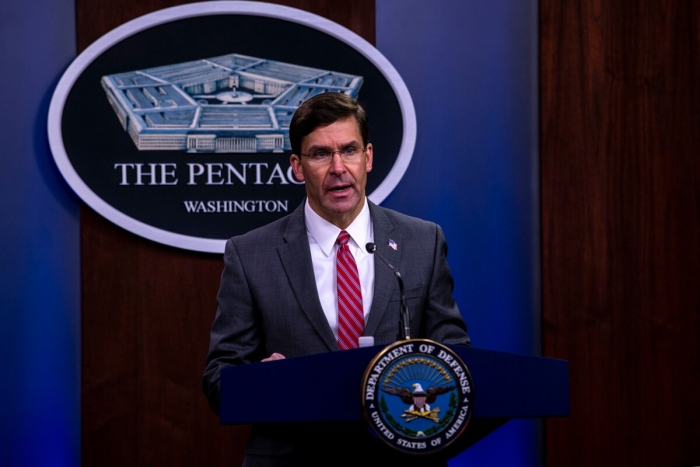 As had long been expected, President Donald Trump fired Defense Secretary Mark Esper on Monday, cutting short what would have otherwise been his final months at the Pentagon, in anticipation of President-elect Joe Biden’s transition in January.

NEWS
U.S. Cuts Troops In Afghanistan To 2,500, Lowest Since 2001
The American Conservative

Go ad-free! Support AllSides.
About these ads
More news about US Military
https://www.militarytimes.com/news/your-military/2020/11/09/exclusive-esper-on-his-way-out-says-he-was-no-yes-man/

The Pentagon has approved National Guardsmen protecting the U.S. Capitol to carry lethal weapons in the days leading up to the inauguration, as law enforcement...

The military has a hate group problem. But it doesn't know how bad it's gotten.

The rise of extremism in the ranks is seen as a "crisis issue" but the military's efforts to weed out radicals are "haphazard" at best. The Pentagon is...

Donald Trump’s fellow Republicans in the US Senate on Friday took the atypical rebellious step of overriding his veto for the first time in his presidency....

Trump And The Military: What An Erratic Commander In Chief Leaves Behind

Donald Trump campaigned hard on military issues. He vowed to bring "endless wars" to a close, "rebuild" the fighting forces and compel allies to pay their...

Congress delivered a stinging rebuke to President Trump during a rare New Year's Day session Friday, handing him his first veto override in the final days of...

The House voted on Monday to overturn President Trump's veto of the gargantuan annual defense authorization bill. The vote, 322-87, was a highly unusual...

With just one week until President-elect Joe Biden's inauguration, federal law enforcement agencies are launching a massive security initiative as they brace...

The Senate voted to override President Trump’s veto of the National Defense Authorization Act, providing the president his first and likely only veto defeat...

Trump to Declassify Intel China Paid for Attacks on US Soldiers