How many Americans have voted early so far? 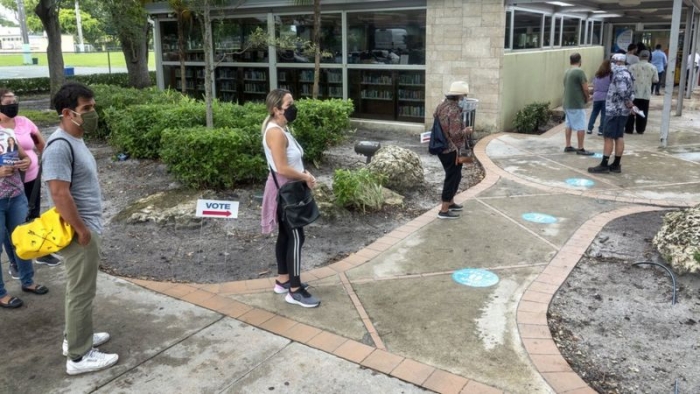 Early voting is exactly what it sounds like - it's where people are allowed to vote before the scheduled election day.

This can be either in-person at early voting stations, or absentee - that is, by post. In-person early voting is common in Finland and Canada, while Switzerland, Germany and the UK accept postal votes.

In the US, this means people are able to cast their ballots before 3 November - either by post or in-person.

Early voting has steadily increased with each election year. The number of people who...

Let’s start this piece with some appropriate caveats about polling in general. 2020 was not a great year for the polling industry. Many polls, especially in...

Trump could announce just before the Georgia Senate runoffs, or even on Inauguration Day. The chatter is unnerving Republicans who feel Trump has frozen the...

President-elect Joe Biden told CNN's Jake Tapper on Thursday that he will ask Americans to wear masks for the first 100 days after he takes office, in a sign...

If William Barr can admit Trump lost, why can’t other Republicans?
OPINION

The Post reports: “Attorney General William P. Barr told the Associated Press on Tuesday that he has ‘not seen fraud on a scale that could have effected a...

Kellyanne Conway, former adviser and White House counselor to President Trump, acknowledged Joe Biden as the apparent winner of the presidential race in an...

In what he billed as perhaps “the most important speech I’ve ever made,” President Donald Trump continued his attempt to deceive the American public into...

U.S. President-elect Joe Biden said on Thursday he would publicly take a coronavirus vaccine to demonstrate its safety to the public and pledged to retain the...

“Attorney General William Barr declared Tuesday the U.S. Justice Department has uncovered no evidence of widespread voter fraud that could change the outcome...

Gov. Brian Kemp, the Georgia Republican who has been fiercely criticized by President Trump over his approach to allegations of voter fraud in his state, said...

Biden to call for 100 days of masks after inauguration

President-elect Joe Biden said during an interview Thursday that he plans to ask the American public to wear masks for 100 days, starting the day he is...

Sen. Ted Cruz (R-Texas) is urging the U.S. Supreme Court to hear an appeal of a ruling by the Pennsylvania Supreme Court that dismissed a GOP lawsuit...

Democrats are reportedly facing voter fraud accusations in an extremely tight New York congressional race that resulted in a Republican candidate having her...

Attorney General William Barr said Tuesday the Justice Department has not uncovered evidence of widespread voter fraud that would alter the 2020 presidential...