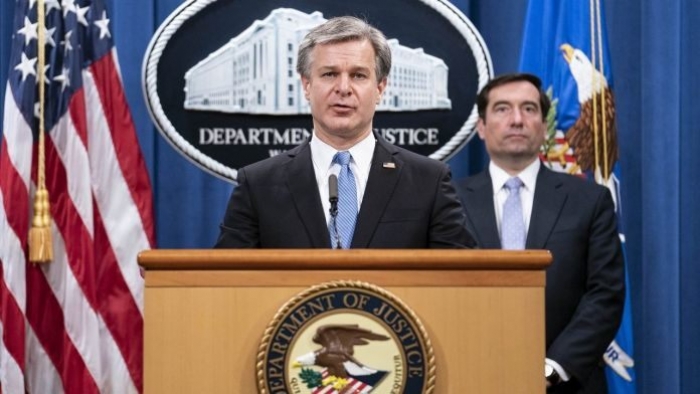 FBI Director Christopher Wray and Assistant Attorney General for National Security John C. Demers announced an indictment of eight Chinese operatives accused of taking part in a widespread campaign to intimidate and coerce dissidents around the world that have reached U.S. soil.

During a Wednesday news conference, Demers stated that the alleged acts were part of China's Operation Fox Hunt, which the Chinese government claims is an international anti-corruption campaign, but the U.S. believes to be a plot to target political opponents and critics.

Federal officials sent a strong, if delayed, message to the public on Tuesday about the Trump-inspired attack on the U.S. Capitol, announcing that hundreds of...

Police and federal authorities in the US are investigating after a Wisconsin health centre said an employee admitted to deliberately spoiling 500 doses of...

With federal officials having identified the man believed to be behind Nashville’s Christmas Day bombing, authorities now turn to the monumental task of...

Leaders in the U.S. House of Representatives received an FBI briefing regarding Rep. Eric Swalwell's ties to a suspected Chinese spy, as a report of his...

FBI investigators are sifting through over 100,000 pieces of digital evidence as part of their sweeping probe into the deadly US Capitol riot — and are eying...

The FBI visited a number of known extremists before last week’s deadly Capitol riots to warn them against traveling to Washington, DC, according to reports...

A Wisconsin-based hospital on Wednesday said an employee who removed 57 vials of the Moderna coronavirus vaccine from the refrigerator earlier this week which...

Last week, Joe Biden’s son Hunter gave media outlets the green light to cover his scandals by releasing a statement saying he learned on December 8 “for the...