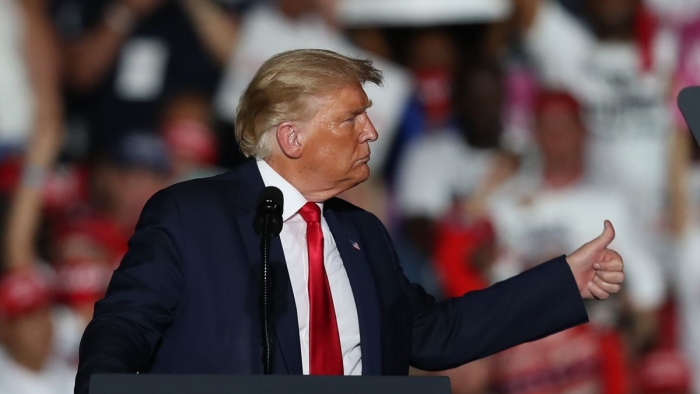 In 2016, President Donald Trump promised at his campaign rallies that Mexico would pay for the giant wall he planned to build on its border.

Running for reelection four years later, the President is now declaring at his rallies that Mexico is indeed paying for the wall.

"And Mexico is paying for the wall, by the way. You know that. I've been saying...

NEWS
Deported Parents Choosing Not to Be Reunited with Children, Holding Out Hope to Return to U.S.
National Review

Despite a federal judge’s order that the government reunite families who had been separated at the United States-Mexico border under the Trump administration’s...

A federal appeals court ruled in June that the government improperly diverted $2.5 billion of the Pentagon's counter-drug program money to build more than 100...

Was Columbus’ Voyage to the “New World” Driven by Islamophobia?
ANALYSIS

Tucked inside historian Alan Mikhail’s new biography of Sultan Selim, the ambitious early-16th-century ruler of the Ottoman Empire, is a riveting series of...

Department of Homeland Security officials have acknowledged that transfers of detainees between facilities holding immigrants for ICE had “contributed to...

US election 2020: Trump's impact on immigration - in seven charts

Donald Trump campaigned for the presidency in 2016 with a pledge to bring down illegal immigration, famously blaming undocumented migrants from Mexico for a...

The U.S. Supreme Court on Monday agreed to decide the legality of one of President Donald Trump’s hardline immigration policies that has forced tens of...

Immigration was a dominant issue in the 2016 election, but not this time

Despite being a signature issue for President Trump, immigration has taken a back seat in the presidential election. Trump has attempted to repurpose...

Is it time for America to stop celebrating Columbus Day?
OPINION

Oct. 12 marks the federal holiday of Columbus Day — or, if you live in jurisdictions like the District of Columbia, Indigenous Peoples Day. The debate over...

The Trump administration is preparing a series of immigration enforcement actions targeting sanctuary cities leading up to the November general election,...

Deported Parents Choosing Not to Be Reunited with Children, Holding Out Hope to Return to U.S.

When the American Civil Liberties Union on Tuesday submitted its most recent court filing on the status of children separated from their parents at the U.S....

Joe Biden, if elected president, would undo a number of key Trump administration’s policies related to immigration, and specifically illegal immigration, a new...

Christopher Columbus, the most famous explorer in history, was once a celebrated hero. Now, many consider him a villain, a despoiler of paradise. So which...

The Trump administration has overhauled the H-1B visa program in a way that will require U.S. companies to pay foreign workers more in a bid to get them to...