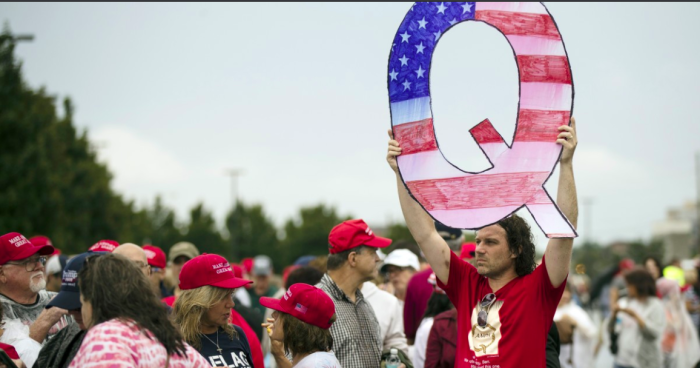 The House passed a resolution condemning the conspiracy theory movement known as QAnon, but 17 Republicans and Michigan Rep. Justin Amash, a libertarian, voted against it.

H.R. 1154 passed on Friday 371-18, with one person voting present. QAnon is a right-wing conspiracy group that believes, among other things, that a group of powerful politicians is involved in a child sex-trafficking ring.

Rep. Buddy Carter of Georgia was one of those who voted nay but later explained on Twitter that he did so unintentionally and instead meant to vote yea.

Go ad-free! Support AllSides.
About these ads
More news about US House
https://www.washingtonexaminer.com/news/seventeen-republican-congressmen-and-justin-amash-vote-against-house-resolution-condemning-qanon

House Democrats subpoenaed a private prison firm Wednesday after it refused to hand over documents related to allegations of medical abuse and Covid safety...

Alexandria Ocasio-Cortez on Biden’s Win, House Losses, and What’s Next for the Left

For months, Representative Alexandria Ocasio-Cortez has been a good soldier for the Democratic Party and Joseph R. Biden Jr. as he sought to defeat President...

In a letter to Democratic colleagues, Nancy Pelosi announced her intent to run for another two years as speaker of the House. "Our vision for the next two...

Pelosi is still negotiating with the White House while Senate Republicans push their own stimulus bill. House Speaker Nancy Pelosi on Sunday set a tight...

With so much focus on the 2020 presidential race, it’s easy to forget there’s also a lot at stake elsewhere on the ballot. Seats in the Senate, House, and...

A group of leading Democratic lawmakers have recommended New York Rep. Gregory Meeks as the next chairman of the House Foreign Affairs Committee, after an...

House Democrats on Wednesday will launch the delicate affair of choosing their leadership team in the next Congress, a routine exercise that’s taken on...

Sen. Bernie Sanders (I-Vt.) is joining the fight against Democrats blaming their left wing for a less-than-perfect election day. While Sanders is "very...

For Speaker Nancy Pelosi, her final years with the gavel may also prove the most challenging. The California Democrat is poised to enter the next Congress...

Republicans Vowed To Elect More Women…They Did Just That
OPINION

House Democrats nominated Nancy Pelosi (D., Calif.) to another term as House Speaker on Wednesday, with no other representative competing for the post, and she...