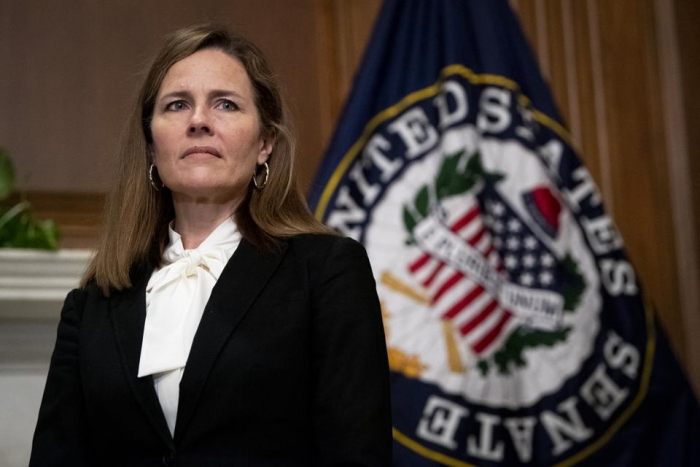 Following a report Thursday morning that President Trump’s Supreme Court nominee Amy Coney Barrett signed a 2006 newspaper advertisement calling for “an end to the barbaric legacy of Roe vs Wade,” heightening concern among abortion supporters, the White House insisted Trump hasn’t downplayed the extremity of Barrett’s views and that the nominee will keep her opinions separate from her duty as a judge.

When Judge Amy Coney Barrett was being vetted for her lifetime position on the highest court in the land, she declined to answer even straightforward questions...

In a narrow 52-48 vote, the Senate has officially confirmed Amy Coney Barrett for appointment to the Supreme Court, a huge win for Republicans who worked...

The U.S. Supreme Court on Wednesday dealt setbacks to Republicans by allowing extended deadlines for receiving mail-in ballots in next Tuesday’s election in...

‘Roe v. Wade’ May Be Closer Than Ever to Being Overturned, but There’s Still a Long Way to Go
OPINION

There’s a lot of hope that the inclusion of Justice Amy Coney Barrett on the Supreme Court means that America is closer than ever to removing the highly...

How Americans can prevent a Court-packing disaster. This month marks the 58th anniversary of the Cuban Missile Crisis, the geopolitical showdown between the...

Shortly after Amy Coney Barrett was confirmed to the U.S. Supreme Court on Monday, Democrats warned Republicans that they would regret their decision to hold...

Nothing threatens the progressive project more than the existence of a Supreme Court that adheres to the Constitution. It’s really that simple. That’s what...

The Senate voted 52-48 on Monday night to confirm Amy Coney Barrett to the Supreme Court in a move that makes the 7th Circuit Court of Appeals judge and Notre...