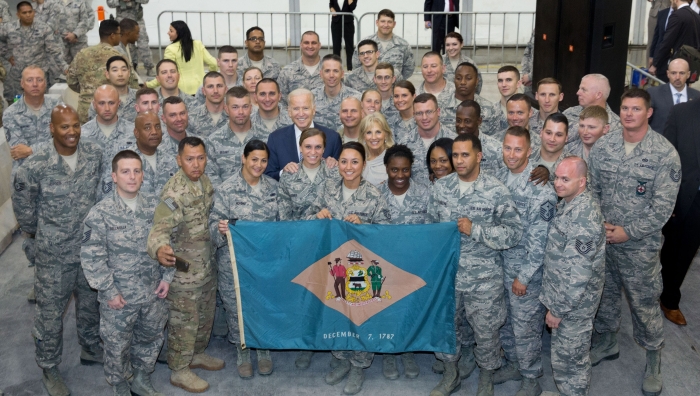 A September story, The Atlantic reported that President Donald Trump had called service members who died at war "losers" and "suckers."

Now, posts online have begun to claim that his opponent in the presidential contest, former Vice President Joe Biden, disrespected the troops, too.

"Notwithstanding what you may hear about me, I have incredibly good judgment," Biden remarks in the video. "One, I married Jill. And two,...

NEWS
Why Did a Georgia Judge Reverse an Order to Impound and Preserve Voting Machines?
The Dispatch

Mute buttons and more: The 2020 debate moderators on what worked, what didn’t

From the point of view of moderator Chris Wallace of Fox News, the first 2020 presidential debate between Donald Trump and Joe Biden seemed promising — at...

In the years-long competition among Fox employees to demonstrate the most obsequiousness to President Trump, it seemed unlikely that anyone might be able to...

One of the big surprises of the 2020 election was how even though most Latino voters across the US voted for Joe Biden, in some counties of competitive states...

Can President Donald Trump wield the power of the pardon to protect himself? This is a question readers have asked us, so we asked legal scholars about a range...

Don’t fall for the fake drive-through coronavirus testing sites that have been cropping up in recent weeks. Yes, that’s right—according to the Federal Trade...

Just how broken is our political information ecosystem, anyway?
ANALYSIS

We’re in a period of political transition here in the United States, with the incoming Biden administration subject to the usual allotment of lobbying,...

In his first interview since Election Day, President Donald Trump recapped baseless, false and misleading claims he has made before of a “rigged” election....

The claim: Pennsylvania recorded more mail-in votes than ballots requested A claim made by President Donald Trump and his supporters on social media is that...

Is Walmart Providing ‘Free Thanksgiving Dinner for All’?
FACT CHECK

What's True: Walmart partnered with Ibotta and other companies to offer cash back rewards on Thanksgiving staples, totaling $20.27 in savings on turkey,...

Why Did a Georgia Judge Reverse an Order to Impound and Preserve Voting Machines?
FACT CHECK

A viral Instagram post from right-wing commentator David Harris, Jr. claimed that a Georgia judge reversing his order for the state of Georgia to “impound and...

Twitter on Tuesday rejected Canberra’s calls to remove a Beijing official’s gruesome tweet targeting Australian troops, choosing instead to stand with the...

Members of the Trump campaign’s legal team have made a series of claims about Dominion Voting Systems and alleged ties to Venezuela in their attempt to cast...