Food, Agriculture, Children, Public Health, Life during covid-19, Safety and Sanity During COVID-19, Inequality
Save for Later
From The Left 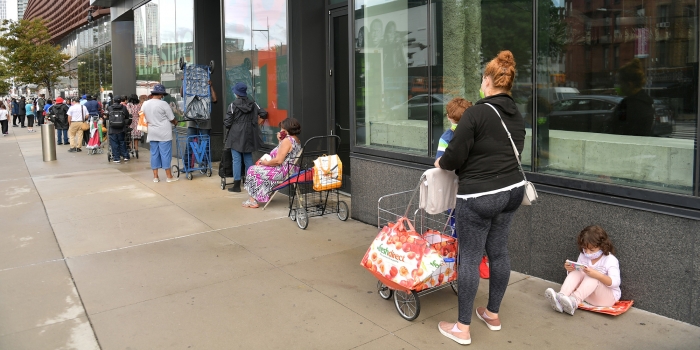 THE LEVEL OF hunger in U.S. households almost tripled between 2019 and August of this year, according to an analysis of new data from the Census Bureau and the Department of Agriculture. Even more alarming, the proportion of American children who sometimes do not have enough to eat is now as much as 14 times higher than it was last year.

The Agriculture Department conducts yearly studies on food insecurity in the U.S., with its report on 2019 released this month. The Census Bureau began frequent household surveys in April in response to Covid-19 that include questions about hunger.

The analysis, by the Washington, D.C.-based Center on Budget and Policy Priorities, found that 3.7 percent of U.S. households reported they sometimes or often had “not enough to eat” during 2019. Meanwhile, the most recent Census data from the end of August of this year showed that 10 percent of households said they sometimes or often did not have enough to eat within the past seven days. Levels of food insecurity in Black and Latino households are significantly higher, at 19 percent and 17 percent, respectively, compared to 7 percent in white households.

Even worse, while about 1 percent of adults with children said their children sometimes or often went hungry in 2019, between 9 and 14 percent of such adults said the same about their kids in August 2020. CBPP estimates that this adds up to about 5 million school-aged children in such households.

Read full story
Some content from this outlet may be limited or behind a paywall.
Food, Agriculture, Children, Public Health, Life during covid-19, Safety and Sanity During COVID-19, Inequality

NEWS
Congress is trying, again, to end hunger in the military
Roll Call