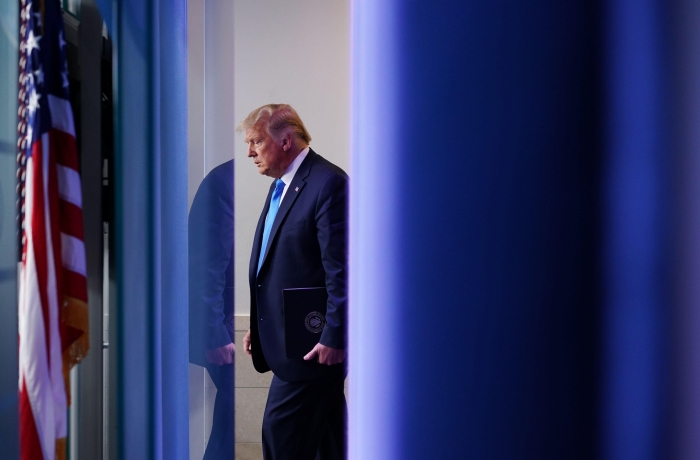 In Donald Trump’s telling of it, the result of the 2020 election, which has not been held yet—and he might even win—is not legitimate. It’s a note Trump struck in 2016, when it looked like he almost certainly would not win, and it’s a scorched earth approach to democracy that he’s only made more extreme this time around. There’s no way to frame Trump’s approach to the upcoming vote as anything other than the stuff of strongmen and authoritarians. This is how elections are treated in Ankara and Moscow.

NEWS
Were Guests at Trump’s White House Event Paid and Required to Sign NDAs?
The Dispatch

Five individuals in Vice President Mike Pence's orbit have tested positive for the coronavirus, including his chief of staff Marc Short and political aide...

The presidential campaign was roiled this weekend by a fresh outbreak of the novel coronavirus at the White House that infected at least five aides or advisers...

A judge on Sunday struck down the Trump administration's efforts to make it more difficult for some adults to receive food stamps. In a 67-page opinion, Chief...

Major news organizations have become increasingly wary of sending journalists to travel with President Trump to White House events and campaign rallies, as the...

At his first public event since being diagnosed with Covid-19, President Donald Trump spoke to hundreds of supporters on the South Lawn of the White House,...

House Speaker Nancy Pelosi (D-Calif.) in a Thursday press briefing reported some progress in her ongoing negotiations with the White House on the next round of...

White House and Democratic negotiators said they would press ahead with efforts to reach a sweeping coronavirus relief deal after making progress Tuesday, even...

“House Speaker Nancy Pelosi reported some progress in advance of a Tuesday deadline for reaching a pre-election deal with President Donald Trump on a new...

President Trump held his first in-person event since his COVID diagnosis at the White House last Saturday—almost a week after returning from Walter Reed...

President Donald Trump said he might be "immune" to the coronavirus after he returned to the White House Monday evening, where he will continue his treatment...

President Trump was discharged from Walter Reed National Military Medical Center and returned to the White House on Monday evening to continue his fight...