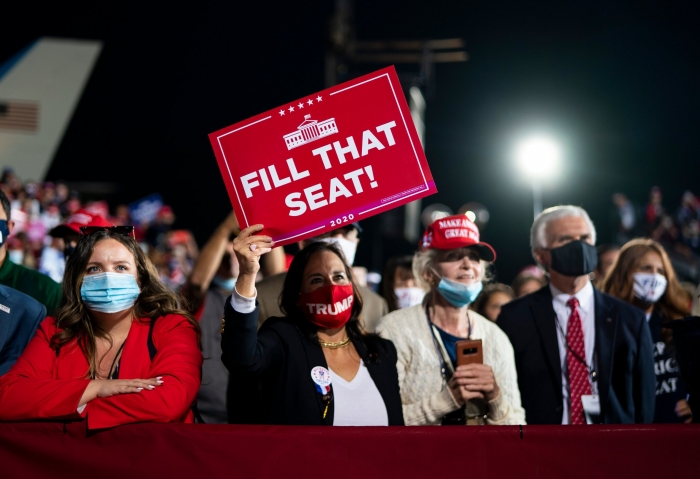 With a nonexistent mandate, he does extraordinary damage.

It was almost inevitable that President Trump would get one Supreme Court appointment during this four-year term. It was always possible that he’d get two.

But three? Seldom has a president’s impact been so inversely proportional to his warrant. Trump, with his nonexistent mandate, reaches extra far and wreaks extra damage. That’s what makes his reign so perverse. That’s the special hell of it.

Almost instantly after the news of Ruth Bader Ginsburg’s death, I checked how many Supreme Court justices Trump’s...

When Judge Amy Coney Barrett was being vetted for her lifetime position on the highest court in the land, she declined to answer even straightforward questions...

In a narrow 52-48 vote, the Senate has officially confirmed Amy Coney Barrett for appointment to the Supreme Court, a huge win for Republicans who worked...

What is originalism? Debunking the myths
ANALYSIS

Originalism has featured prominently in each of the last three Supreme Court confirmation battles – those of Neil Gorsuch in 2017, Brett Kavanaugh in 2018 and...

The Republican-controlled U.S. Senate is expected on Monday to confirm President Donald Trump’s nominee, Amy Coney Barrett, as the next justice to the Supreme...

The Senate voted 52-48 on Monday night to confirm Amy Coney Barrett to the Supreme Court in a move that makes the 7th Circuit Court of Appeals judge and Notre...

WASHINGTON D.C.—With Amy Coney Barrett’s confirmation looming, Democrats have raised a number of questions about her fitness as a Supreme Court justice and...

Republican Senators Susan Collins and Lisa Murkowski voted against going into an executive session to consider the confirmation of Amy Coney Barrett Friday...

One of the major issues in this year's election has been the Supreme Court and whether or not former Vice President Joe Biden will try and "pack" it by adding...