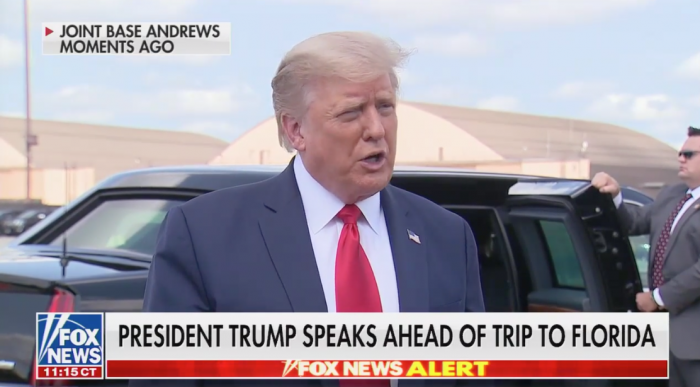 President Trump told reporters on Tuesday that he'll spend "whatever it takes" of his own money if necessary to win in November, stressing that it's "the most important election in the history of our country."

Why it matters: The comments come after reports that Trump's campaign is having real money concerns — an unusual position for an incumbent that has worried GOP operatives. The campaign has yet to release its August fundraising, but Joe Biden and the Democrats say they raised a record-breaking $364.5 million last month.

Misinformation and conspiracy theories swirling around the 2020 presidential race are reaching an "alarming" number of Latino voters in Florida through Spanish...

Debate commission to mute candidates during their opponent's initial responses to prevent...

Former Vice President Joe Biden and President Donald Trump will have their microphones muted during portions of the second and final presidential debate on...

During a town hall event on Oct. 15, NBC News’ Savannah Guthrie pressed President Donald Trump on his sharing of a baseless conspiracy theory that accused his...

McConnell aims for unity amid growing divisions with Trump

Senate Majority Leader Mitch McConnell (R-Ky.) is aiming to unify his caucus in the final stretch before the elections amid increasingly public divisions...

They could well make the difference in a number of key battleground states. To prevent Donald Trump from winning a second term, Joe Biden has to reach two...

President Donald Trump and Joe Biden are statistically tied among Catholic voters in six battleground states, according to a new poll by EWTN News/Real Clear...

Trump Is Giving Up
OPINION

Against both the coronavirus and Joe Biden, the president’s strategy increasingly accepts defeat. Donald Trump can still win the 2020 presidential election...