Even as president, Donald Trump takes a familiar stance: The political outsider 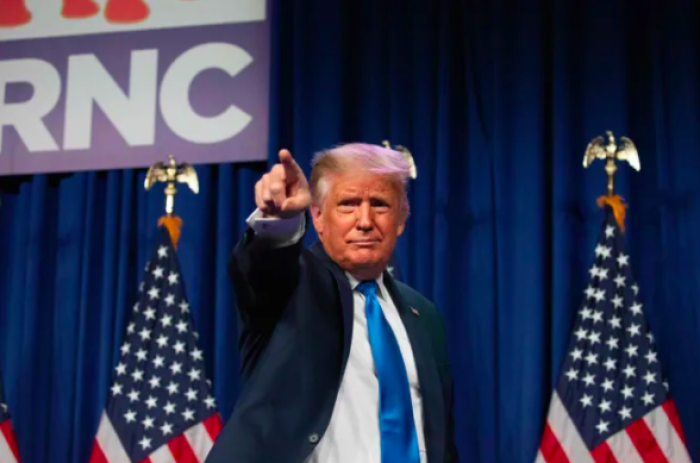 After nearly four years in the world's most powerful post, Donald Trump will formally accept the Republican nomination for president at his convention Thursday, taking a familiar stance.

He'll do that despite speaking from the South Lawn of the White House and leveraging displays of presidential power unprecedented at any other modern political convention. During his tenure, he has appointed two justices to the Supreme Court and named more than 200 judges to the federal bench. He's issued executive orders that stretch the powers of his office.

HEADLINE ROUNDUP
Perspectives: Marijuana Legalization is On the Ballot In These Five States

PERSPECTIVES BLOG
Trump vs. Biden on Gun Rights and Gun Control, Explained in Two Minutes
NEWS
Don't Freak Out About the Election
Reason

Between the presidential election, governors’ races, and down-ballot contests, this year’s election features a lot of important choices. Among those, voters in...

The "Anonymous” Figure Who Claimed To Be Resisting The Trump Administration Actually Defended...

Before he penned an anonymous, explosive New York Times column claiming to be part of a group of "like-minded colleagues" intent on bringing down the Trump...

What Was Happening Exactly One Week Before the 2016 Election
OPINION

Jane the Virgin lost her virginity. The Chicago Cubs were playing in the World Series. It was #DMYourCrushDay on Twitter. These are just a few of the things...

Joe Biden’s campaign will be running television ads in El Paso, San Antonio and Dallas-Fort Worth heading into Election Day. The Democratic nominee for vice...

This election, Americans will once again show their support for marijuana legalization
OPINION

Millions of Americans will head to the polls in the coming days and cast votes on whether or not to legalize the use of marijuana in their states. If past is...

In 1981, the Republican National Committee sent hundreds of armed, off-duty police officers to the polls in the state of New Jersey. Dressed in official-...

Less than a week out from Election Day and President Donald Trump is playing catch-up. In 2016, he won 30 states (and Maine's 2nd Congressional District) and...

Don't Freak Out About the Election
OPINION

The battle for Texas
ANALYSIS

Some pundits and a whole lot of excited Democrats project the once fiery-red Lone Star State to be on the verge of going blue — or at least turning a shade of...

Everyone can see President Donald Trump's rallies. In the final days of the campaign, he is jetting from swing state to swing state, drawing big crowds to...

The Only Middle Finger Available
ANALYSIS

If Donald Trump wins a second term, it will be an unmistakable countercultural statement in a year when progressives have otherwise worked their will across...