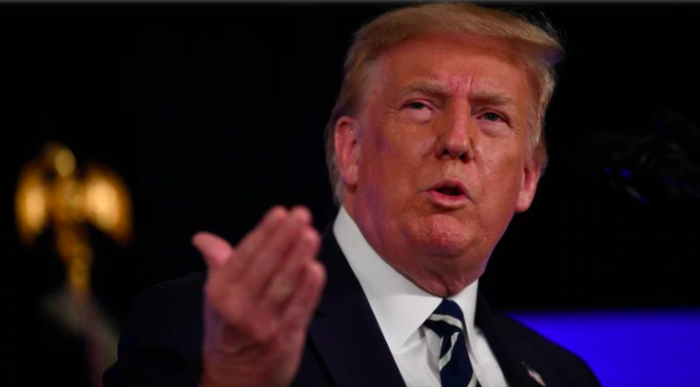 WASHINGTON — President Donald Trump is teasing the possibility of executive action to require health insurance companies to cover preexisting medical conditions, something that he says “has never been done before.”

It’s been done before.

People with such medical problems have insurance protection because of President Barack Obama’s health care law, “Obamacare,” which Trump is trying to dismantle.

A look at Trump's claim during a news conference Friday evening in Bedminster, New Jersey:

NEWS
‘We’ve always known ours was contaminated’: the trouble with America’s water
The Guardian

Trump says U.S. will have vaccine doses for all Americans in April

President Donald Trump said Friday that there will be enough doses of coronavirus vaccine for every American by April, contradicting administration health...

A whistleblower complaint filed Monday by several legal advocacy groups accuses a detention center of performing a staggering number of hysterectomies on...

There Was A College Mental Health Crisis Before COVID-19. Now It May Be Worse.

With very few colleges and universities across the United States fully reopened, learning is not as it used to be. COVID-19 has dramatically redefined...

The House Committee on Foreign Affairs is set Monday to release an audit report on actions perpetrated by China and the World Health Organization at the...

EXPLAINER-When will COVID-19 vaccines be generally available in the U.S.?

U.S. President Donald Trump and the head of the Centers for Disease Control and Prevention (CDC) this week disagreed about when a COVID-19 vaccine would become...

A new report from the Bill and Melinda Gates Foundation details the effects of the Covid-19 pandemic on global health progress and lays out expectations for...

Trump: Coronavirus vaccine will be distributed 'rapidily' once approved

President Donald Trump touted progress on the development of COVID-19 vaccines and a distribution plan released Wednesday that an advisor said could make...

In recent days, the liberal media have dedicated a lot of effort into stoking fear the coronavirus vaccines being developed by multiple pharmaceutical...

Trump: DOD Will Distribute Vaccine Doses Within 24 Hours Of FDA Approval — Will Be Available To...

President Donald Trump announced Friday that the Department of Defense will begin distributing coronavirus vaccines 24 hours after the Food and Drug...

A federal judge on Monday has ruled that lockdown restrictions imposed by Pennsylvania Gov. Tom Wolf (D), including a ban on large gatherings and the closure...