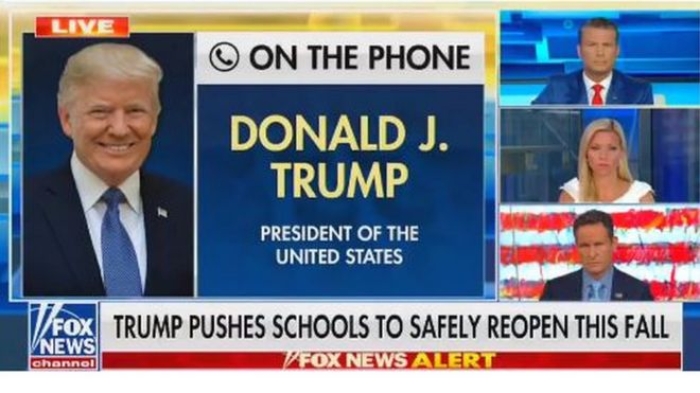 Facebook and Twitter have penalised Donald Trump and his campaign for posts in which the president claimed children were "almost immune" to coronavirus.

US public health advice makes clear children have no immunity to Covid-19.

NEWS
Facebook Censors Conservative Ads, Even Though Fact Checkers Admit They Could Be True
CBN

What You Can No Longer Say in Hong Kong

Facebook will ban new political ads for the week leading up to Election Day, Nov. 3, and remove posts that try to suppress or discourage voting, the company’s...

How much does Donald Trump hate getting dunked on in his Twitter replies? So much so that amidst unprecedented global and domestic crises which you’d imagine...

One of Facebook’s top executives in India wants police to investigate death threats and abuse she’s received on the social network after a news story revealed...

Facebook says it has taken down a network of China-based fake accounts whose posts included content about the U.S. presidential election. Most of the...

MARK SARGENT SAW instantly that his situation had changed for the worse. A voluble, white-haired 52-year-old, Sargent is a flat-earth evangelist who lives on...

How do Americans understand the differences between profanity and hate speech online?
ANALYSIS

The internet is a polarized place and often a difficult place to have meaningful discussions. With no globally recognized definition for what constitutes hate...

New Alliance to Track and Fight Censoring of Conservatives

Twitter has suspended the account of a Chinese virologist who has claimed that COVID-19 was manufactured in a laboratory. Dr. Li-Meng Yan, a former...

If the coronavirus pandemic has proved anything it is that most Americans and their leaders are more concerned with their safety than with preserving their...