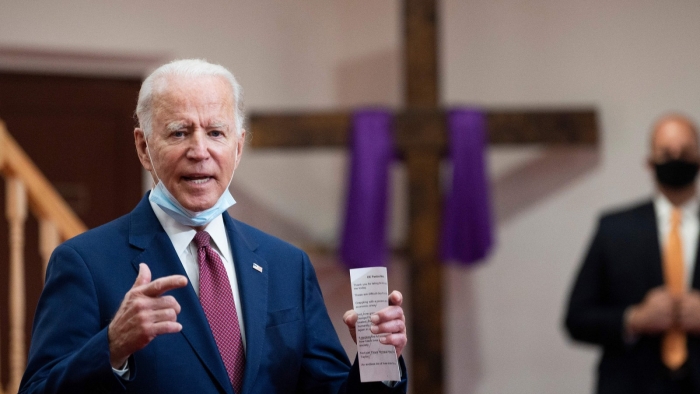 President Donald Trump has attacked rival Joe Biden and the Democrats on God as he moves to shore up support among the Christian voters that were integral to his 2016 victory.

Trump has suggested Democratic presidential candidate Biden and his party are "against the Bible" in a recent "tele-rally" with supporters in Pennsylvania.

"Essentially, they're against God if you look at what they're doing with religion," he said.

He did not expand further on how he felt they were against religion, but his comments reiterate similar combative lines he has...

This election year, America faces interlocking crises—a global health crisis, economic collapse, and systemic racism. Even as we live in fear of disease and...

President Donald Trump on Thursday denounced school curricula that emphasize the impact of slavery and racism on American history and blamed “left-wing...

Jerry Falwell Jr., early apostle of Donald Trump and happy scourge of the libs, has finally resigned as president and chancellor of Liberty University. A...

One of the overarching themes of the Supreme Court’s recent term was that it was surprisingly liberal on several major issues: upholding gay rights, striking...

Under fire for an alleged sex scandal, the embattled Jerry Falwell Jr. has submitted his resignation as head of Liberty University, school officials said...

How Trump is moving heaven and earth to motivate evangelical voters

God is “on our side,” President Donald Trump told Evangelicals in January. Their support is steadfast, but their numbers are shrinking as a proportion of the...

What is the connection between belief in God and morality? And how important are God and prayer in people’s lives? Pew Research Center posed these questions to...

One California megachurch pastor who initially refused to stop holding indoor worship services has submitted to the city government after facing more than $100...

Does Amy Coney Barrett Want to ‘End the Separation of Church and State’?
FACT CHECK

A viral tweet claims that Judge Amy Coney Barrett has said her end goal is “to end separation of church and state...

President Donald Trump on Thursday announced plans for a new commission to promote “patriotic education” in U.S. schools. Speaking at the National Archives...

The US Department of Defense (DOD) has announced it's implementing stronger guidelines to safeguard religious liberty for military service members. First...

Writing in First Things, Darel Paul has a strong piece condemning the “racialism” that is au courant in American intellectual circles today. Excerpts: The...