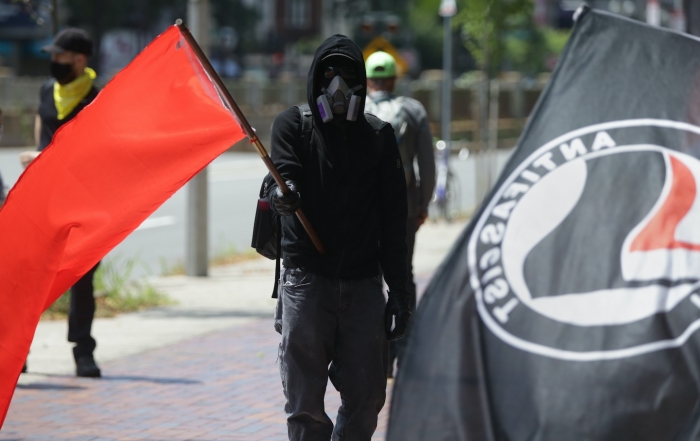 The Department of Homeland Security (DHS) intelligence officials are targeting activists it considers “antifa” and attempting to tie them to a foreign power, according to a DHS intelligence report obtained exclusively by The Nation.

The intelligence report, titled “The Syrian Conflict and its Nexus to the U.S.-based Antifascist Movement,” mentions several Americans, including a left-wing podcast host who traveled to Syria to fight ISIS.

NEWS
Can the Postal Service be saved?
Yahoo! The 360

Afundamental test for any voting system is whether it treats citizens equally. America’s presidential election uses the “electoral college”, which allocates...

A few weeks after the murder of George Floyd, the commentator Matthew Yglesias announced to his four hundred thousand Twitter followers that he was about to...

It is a frightening time to live in the United States. COVID-19, a novel disease as ruthless as it is seemingly random, is picking us off by the thousands;...

The US food system is killing Americans
OPINION

This global pandemic has given a new meaning to the idea of American exceptionalism. The United States is faring far worse than other countries and shoulders a...

The Trump administration is dramatically increasing fees for dozens of immigration and work applications, including a more than 80 percent increase on...

What talk of ‘abolishing the suburbs’ is really about

President Trump has made repeated overtures to suburban voters over the past month, mostly in the form of social media posts saying that Joe Biden wants to “...

In January, Philip McHarris was driving from New Haven to Boston to visit a friend when he saw a familiar sight in his rearview mirror — flashing police lights...

Trump says adding his face to Mount Rushmore would be a 'good idea.' It would likely be...

President Donald Trump tweeted Monday that he thought it would be a "good idea," to have his face ono Mount Rushmore but making any additions to the landmark...

As riots and Covid-related economic problems have afflicted America’s big cities, many on the right have been quick to blame progressive mayors for decades of...

Does the Postmaster General Have $70 Million Invested in USPS Competitors?
FACT CHECK

Claims that Postmaster General Louis DeJoy has more than $70 million invested in competitors to the Postal Service have gone viral on social media the past few...

‘Defund the Police’ is a media fantasy
OPINION

A new, exhaustive study by Gallup and the Knight Foundation found that Americans across the board are losing trust in the media. Some people might be shocked...