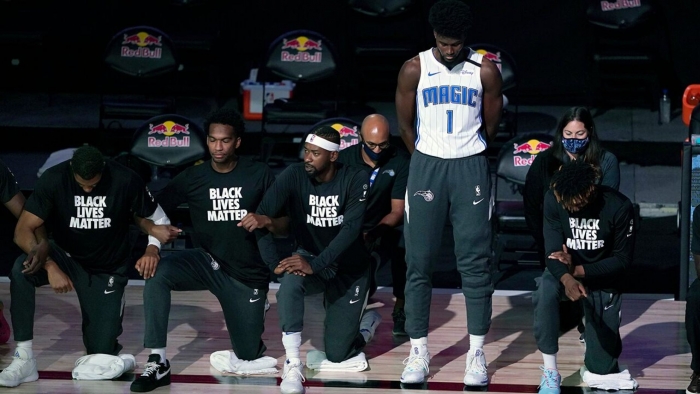 Orlando Magic forward Jonathan Isaac was the lone player to stand during the national anthem on Friday as his teammates and Brooklyn Nets players knelt to protest racial injustice and police brutality.

Isaac was the lone person out of the first three games of the NBA’s restarted season. He also didn’t wear a Black Lives Matter shirt and instead chose to stand with his arms at his back with his Magic jersey showing.

The NBA’s Social Justice Dilemma: Do Sports Distract and Detract From Activism?
ANALYSIS

Ever since the NBA announced that it would return to action on July 31, debate has swirled around two central questions: Would the bubble be safe, and would...

The phrase “stick to sports” — hurled at athletes and commentators by people who mistakenly believe it’s possible to separate politics and athletic pursuits —...

The N.B.A. has been accused of helping run basketball academies in China where children were regularly abused by coaches and staff members at government-run...

The NFL's Washington Redskins have decided to change their team name. "On July 3rd we announced the commencement of a thorough review of the team's name...

The Modified Comeback of U.S. Sports: Fewer Fans, Shorter Seasons and Many Questions

ON MARCH 12, JUST TWO weeks ahead of the league's scheduled opening day, Major League Baseball announced it was halting operations "indefinitely" on account of...

Sports During the Pandemic

This Abridge News topic aggregates four unique arguments on different sides of the debate. Here are the quick facts to get you started: THE QUICK FACTS COVID...

Credit Alex Wood with prescience. Early in spring training when all anyone was talking about was the Houston Astros’ sign-stealing scam and the discipline...

LOS ANGELES — Two pitchers with four Cy Young Awards between them — Clayton Kershaw (three) and David Price (one) — were supposed to be in the Dodgers’...

'The first step': Yankees, Nationals players all kneel before national anthem in MLB...

WASHINGTON — Though it was the novel coronavirus that delayed Major League Baseball’s Opening Day by nearly four months, the social reckoning that occurred...

The Stolen Land Under Dodger Stadium

On July 24, 1950, the city of Los Angeles sent a letter to the residents of the Palo Verde, La Loma, and Bishop neighborhoods. Their homes would soon be...

It turns out that bucking woke trends may be good for business, because jersey sales for Orlando Magic player Jonathan Isaac have been surging since he decided...

A series of viral social media posts claim that the National Football League is donating $250 million to Black Lives Matter. The claim is based on a real NFL...

The Navajo Nation released a statement on Monday that suggested that the Washington Redskins rename their team “Code Talkers” to honor the Navajo Code Talkers...