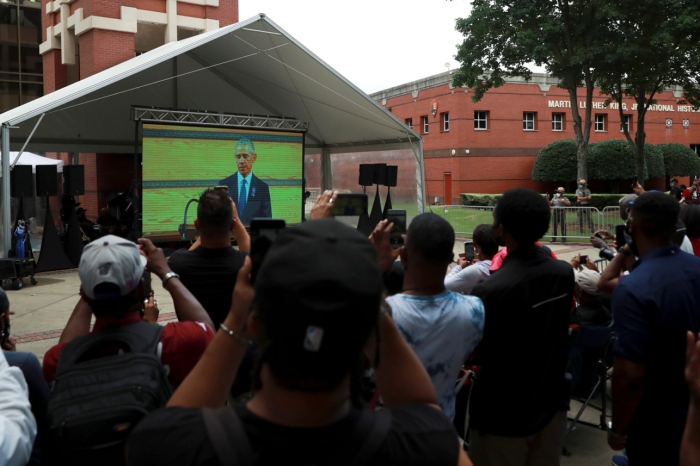 “I’ve come here today because I like so many Americans owe a great debt to John Lewis, and his forceful vision of freedom,” the former commander-in-chief said at the beginning of his eulogy.

“Now this country is a constant work...

PERSPECTIVES BLOG
When a Debate Turns into a Debacle

NEWS
Marjorie Taylor Greene visited the Capitol and tried to get Reps. Ilhan Omar and Rashida Tlaib to retake their oaths on the Bible
Media Matters

Go ad-free! Support AllSides.
About these ads
More news about US Congress
https://nypost.com/2020/07/30/barack-obama-delivers-eulogy-at-rep-john-lewis-funeral/

Debt, eviction and hunger: Millions fall back into crisis as stimulus and safety nets vanish

One of the most successful elements of the government’s response to the coronavirus recession — protecting people on the margins from falling into poverty — is...

Marjorie Taylor Greene visited the Capitol and tried to get Reps. Ilhan Omar and Rashida Tlaib to...
ANALYSIS

Republican congressional candidate and right-wing pundit Marjorie Taylor Greene is a bigot both on and offline. In February 2019, she visited Capitol Hill...

'I'd Take Anything': As Stimulus Checks Stall, Americans Detail How Congress'...

Americans are feeling the financial pain caused by the coronavirus pandemic as negotiations over a new round of economic stimulus legislation have stalled,...

The House passed a bill Tuesday that would fund the government into December and avoid a shutdown before a Sept. 30 deadline. After clearing the House in...

House Democrats on Monday released their proposal for short-term legislation to fund the government through December 11. Why it matters: This is Congress'...

Wall Street’s main indexes tumbled to their lowest in nearly seven weeks on Monday, with the Dow shedding as much as 900 points, as worries about fresh...

The bipartisan Problem Solvers Caucus unveiled a $1.5 trillion stimulus proposal this week that would provide another round of $1,200 direct payments to most...

Treasury Secretary Steven Mnuchin said Monday that he worries another coronavirus relief package might not be enacted because Speaker Nancy Pelosi fears it...